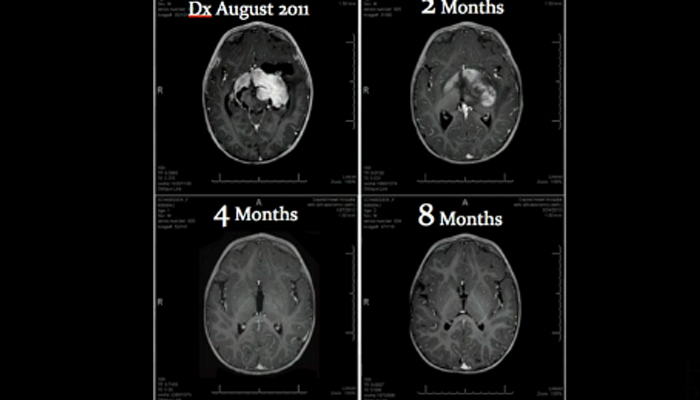 After 2 months of applying cannabis oil to his babies pacifier, the infants brain tumor “had shrunk so much that no chemo was needed.”

“They were putting cannabinoid oil on the baby’s pacifier twice a day, increasing the dose… And within two months there was a dramatic reduction, enough that the pediatric oncologist allowed them to go ahead with not pursuing traditional therapy,” says Dr. Courtney.

“Currently the child is being called a miracle baby,” says Dr. Courtney.

Although a controversial subject, it is important to remember the child is healthy now and shows no signs of any long-term side effects from the treatment of cannabis oil.

She goes on to say, “this child, because of that, is not going to have the long-term side effects that would come from a very high dose of chemotherapy or radiation… I would have to agree that this is the perfect response that we should be insisting is front-line therapy for all children before they launch off on all medications that have horrific long term side effects.”

This is just one of many cannabis oil success stories that has surfaced. Is cannabis the wonder drug we always sought? We have summarized the full story here.