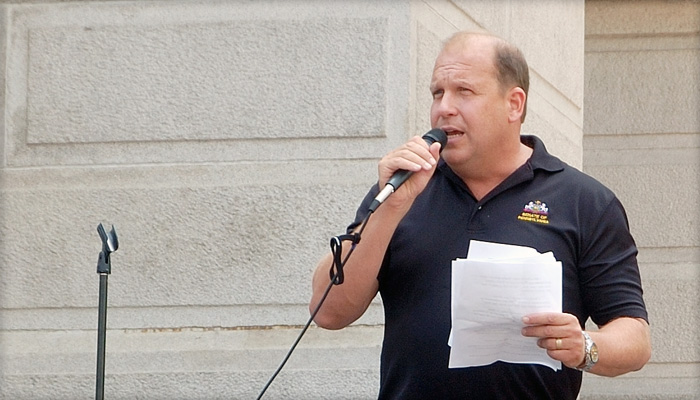 It’s Daylin vs. Goliath in Pennsylvania!

Senator Daylin Leach (D) is a member of the Pennsylvania Senate who has served the Montgomery and Delaware Country district since 2009. Although the state has decriminalized cannabis, this year he is sponsoring a bill that will legalize it entirely.

However, Governor Tim Corbert Says He Will Veto Anything

This is despite the fact that Governor Tim Corbet has previously declared marijuana as a “gateway” drug, and stated that he will veto any and all legalization bills that reach his desk, having anything to do with cannabis — whether medicinal or recreational.

“Prohibition is a cruel, irrational policy which is destroying lives, costing us billions of dollars, and is doing no good whatsoever.” – Senator Daylin Leach

Sen. Leach on the other hand, does not believe in prohibition at all. In his interview with Pennsylvania Cable Network (PCN), Sen. The Senator believes that legalization would completely eliminate the black market of cannabis.

“There is nobody standing outside the school house store selling bottles of Grey Goose, it’s just not financially worth it because there’s a state store around the corner,” the Senator stated.

“When you go to a liquor store and ask for a bottle of Citron, the person behind the counter does not say ‘Here’s your bottle of vodka, by the way I have some cocaine if your interested?’, that typically doesn’t happen, OK?” he said half-way jokingly.

Under the Senators proposed bill, Cannabis will be taxed and regulated just like alcohol; it will only be available in state stores and verified distributors. You will have to be twenty-one years or older to purchase Cannabis, and driving on the substance will remain illegal as well as smoking in public locations like restaurants.

Although a former senator is pushing for medical use bills, Sen. Leach believes that every day that goes by where a person’s life is ruined for getting arrested for having a, “marijuana cigarette,” is an injustice.

“If we were starting a system from scratch, and we had two substances, alcohol, and marijuana…or cigarettes…We would never, starting now, make marijuana illegal.” – Sen. Daylin Leach (D)

The Senator claims that his bill, “is inevitable. This will pass because of two reasons; number one, demographics, and number two is exposure.” He states that the older you are, the less likely you are to vote for marijuana. So as older generations fade out of the political arena, we will see huge shifts in the polls as a result. In addition, since the whole nation has been watching California and Colorado attentively as they legalize with no problem, it’s going to be harder to paint the horror stories of legalization.

If you are for marijuana legalization, we ask you to contact your state representatives and let them know you are responsible enough to handle it. Senator Daylin Leach is exactly the kind of Senator the people ought to have to have representing them. It is so refreshing to hear a politician who knows the facts and understands that the prohibition of cannabis is unjust.

One final (awesome) quote from the Senator: “In ten years or fifteen years, we will look back and wonder why this was ever controversial. We will look upon prohibition against marijuana, the way we look upon the prohibition of alcohol. Some kind of quaint, arcane thing from the past.”