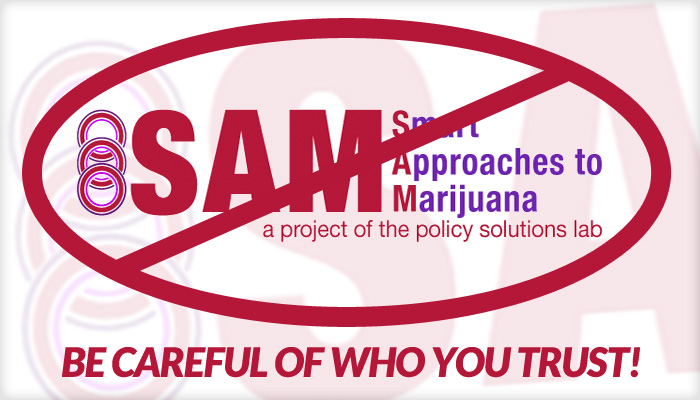 Beware of Project SAM: A Group Created To Halt Any and All Legalization Efforts

Kevin Sabet, a former White House drug policy advisor, is the co-founder of a group that goes by the name of Project SAM – which stands for ‘Smart Approaches to Marijuana’. However, they are completely anti-cannabis.

The group was formed under President Obama to directly counter the growing legalization movement. Other members include Rhode Island Rep. Patrick Kennedy, and former President George W. Bush speechwriter, David Frum (we all know how brilliant that guy must be if he was the mastermind behind Bush’s speeches).

The members at Project SAM are extremely worried they are losing the, “public health battle,” and that people who are misinformed about marijuana’s “dangers” are determining policy. Essentially what they are saying is that the 50% (probably more) of Americans that think the government should treat cannabis the same as alcohol, are misinformed. Which is obviously not the case.

We recommend all cannabis activists to be extremely skeptical of this group. They claim they are working for “smart approaches to marijuana,” yet they are completely anti-pot, and they were created to halt any and all legalization efforts.

The group cherry-picks studies that represent the smallest portion of pot users, then applies that skewed information to the whole. Project SAM has stated that cannabis is, “injurious to the mind,” and they claim “usage among teenagers to schizophrenia and a drop in IQ.”

What makes them more credible than the hundreds of peer-reviewed studies, and the hundreds of thousands of real-life testimonies in support of the plants medicinal properties? I suppose they are all just uninformed too? I think the members of Project SAM are the ones who are uninformed.

SAM fears that legalization will lead to more teenagers getting marijuana second-hand from adults. The fact of the matter is that it’s going to happen either way. At least if cannabis were legal, kids would be getting it from their older brother like they do alcohol, or parents if they so choose, instead of a drug dealer (which they will seek out, and will find if they so desire). Not only is this a safer process, but it also takes one drug off the shelves of gangs and cartels running the black market drug rings.

I don’t understand what constitutes the funding of a group solely dedicated to countering cannabis legalization. If the government were truly worried about the health and safety of children, they would make a group that focuses on making cigarettes completely illegal. Right? I get the feeling that somebig money and corruption may be behind the creation of this group. Not to mention, Kennedy has ties to the pharmaceutical industry. I wouldn’t be surprised if SAM’s group of “scientists” is the first to gain approval for their studies on cannabis; I can’t wait to see those results. They are pushing to promote the research of marijuana for the purpose of creating FDA-approved, pharmacy-dispensed, cannabis BASED medications. This is how you know they are misinformed.

Cannabis needs to be used as a preventative, not only a treatment like the group makes it out to be. They are still restricting the plants true potential to provide patients with all of its medicinal benefits.

“Nothing needs to be done to cannabis to make it a medicine. It is the most beneficial medicine known to mankind in its raw state, and I’m quite positive a patent is not required in order for the cannabinoids to provide their medicinal benefits.”

While Project SAM aims to shut down local dispensaries, they are essentially working towards a way to put the profits in the pockets of big pharmaceutical companies. Rick Simpson has been curing cancer and other illnesses for years using hemp oil! Why change something that works?

To Ben Cort, director of ProjectSAM: You should know you sound extremely ignorant when you make accusations like existing cannabis research is being conducted by, “industry lap-dogs or those with clear agendas.” Especially when you state in the same argument that, “a peer-reviewed [study] is science.” If you would like some entertainment, here is 105 peer-reviewed studies that were done on cannabis. Still not enough evidence…? In addition, none of those tests involved the man-made substances Project SAM suggests as substitutes, such as Marinol, Nabilone, or Cesamet.

You accuse Ms. Szalvitz of cherry-picking studies to prove marijuana is harmless, then turn around and do the same thing stating, “early use can hurt adolescent brain development. This, in turn, leads to addiction for 1 out of every 6 kids who try the drug, and persistent use is tied to IQ declines, memory loss, learning problems, mental illness and impaired driving.” Let’s start citing our sources instead of merely throw stats out like a junior high school food fight. Sound good, Ben?

Now don’t get us wrong, not everything is horrible about Project SAM. They are not here to “demonize” marijuana, or make “users rot in prison”… but they do want to ensure growers and sellers still receive misdemeanors or felonies based on amounts possessed. In addition, they recommend that possession or use of a small amount of marijuana be a civil offense subject to a mandatoryhealth screening, and entry into a marijuana-education program. Individuals could even be monitored for up to 6 to 12 months in a probation program designed to prevent further drug use.

Since SAM doesn’t want to, “harm marijuana users and low-level dealers with arrest records that stigmatize them for life,” they suggest that those who are sentenced and considered ‘addicted’, be subject to mandatory treatment in prison (as well as aftercare provided by a third party licensed by the state). “Restoration of all civil rights,” and expungement of small possessions from personal record will be granted once sentences have been served. This “Project” is starting to seem like the group of “hardened drug warriors” that the Rolling Stone accused them of being. I am sensing some ulterior motives here. I mean, why are these peopleso concerned with cannabis remaining a Schedule I drug?

Project SAM Wants To Continue The Prohibition of Marijuana

Project SAM believes that while suffering patients wait for the FDA to approve cannabis-based medications, “the FDA and the U.S. Department of Health and Human Services should administer a program permitting the truly sick and dying to receive yet-to-be approved, non-psychoactive, non-smoked components of marijuana under a special research program.”

“Project SAM makes it perfectly clear on their ‘Rescheduling Marijuana’ webpage that they are pushing for a continuation of marijuana prohibition.”

They go on to say, “rescheduling marijuana is neither necessary, nor desirable, for those actions to happen.” Basically, they are admitting that cannabis possesses at least some medicinal properties, but they do not think the rescheduling of marijuana makes sense or is necessary. Interesting…

Despite all of this, I appreciate the fact that Project SAM is, “here to demand that the debate move into the adult world,” and pushing to see the real scientific evidence behind cannabis; it’s about damn time! However, when we see scientific evidence in support of cannabis, we expect to see a reclassification of the drug (plant) as well. We agree that today’s policies are costly and we need to consider both sides of the argument in an honest discussion about cannabis. We also want to prevent the establishment of “Big Marijuana” businesses, but not because they are going to advertise to children. How can you use that as an argument when you see a Budweiser commercial every 10 minutes on Sunday Night Football? What are you doing to confront that issue?