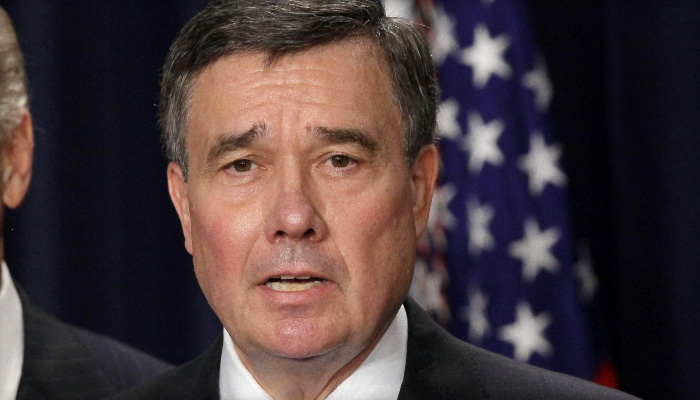 by Zach Reichard on February 15, 2013
ShareTweet

This week, a Canadian news magazine got the chance to sit down with U.S. drug czar, Gil Kerlikowske, for an exclusive interview that would appear to be the first.

Ever since cannabis was legalized for recreational use in Washington and Colorado, many people have been holding their bong rips waiting for a reaction from a federal official. The director of the Office of National Drug Control Policy stated explicitly that the federal government will prosecute recreational dispensaries and producers in the two states (once they are licensed), regardless of the growing support for state marijuana legalization.

The interviewer begins by asking Kerlikowske where things stand with regard to prosecuting recreational users in states where cannabis is legal. “You’ll continue to see enforcement against distributors and large-scale growers as the Justice Department has outlined,” answered the czar. He added, “They will use their limited resources on those groups and not going after individual users.”

“You’ll continue to see enforcement against distributors and large-scale growers as the Justice Department has outlined.” – Gil Kerlikowski

Kerlikowske stated that he does not view marijuana as a human or civil right, but as a public health issue. He claims that there are, “significant health concerns around marijuana from all the science, not ideology.” Significant health concerns? What about all the health benefits the plant provides? Not to mention the laws in place don’t prevent people from exercising their human right to ingest whatever they please.

The interviewer asks, “Have you done more to deal with the medical side?” Kerlikowske deflects the question by responding, “We helped shift federal funding so that more money has flowed into drug treatment and prevention programs. We have tried using the bully pulpit of the White House to talk about the disease of addiction and to talk about it in a public health model.” This sounds similar to the ideology of his friends at Project SAM. He is purely focused on feeding people into addiction clinics against their will. He doesn’t express any concern for providing truly suffering patients with their cannabis. Why all this lying and deceit Gil?

The U.S. Drug Czar’s Job Description Is The Major Issue

Essentially what this means is that, despite whether extensive evidence of medical marijuana’s effectiveness comes forth or not, he is required by law to lie about it! This is regardless of the fact that the government owns patents on certain cannabinoids in the plant, and supplies it to patients in an exclusive program.

Naturally, the U.S. Drug Czar is required to make preposterous statements like, “More people dying of prescription drug abuse than heroin and cocaine combined,” but then go on to say, “After marijuana, we see prescription drugs as the next most significant drug problem we have.” This is just another attempt to deceive. By now, he must know that the increase in treatment admissions for marijuana has next to nothing to do with addiction, and everything to do with court ordered referrals. How can Mr. Kerlikowske sit here and demonize a completely harmless plant that heknows has medicinal benefits and is far better & less harmfl than other legal drugs?

Again, the problem lies within his job description. The law which defines the job description of the drug czar will require every future czar, good or bad, to keep up the lying and deceit of the job role. They will have to support bogus lies like the war on drugs is working, marijuana is harmful, legalization would make things worse, and so on and so forth just to keep their job. It seems like it would take a deprived, megalomaniac to fill this job position.

The fact of the matter is, for Kerlikowske’s crackdown to be possible; it would require the police and all county, city, and state officials to cooperate with the feds. Every state has the right to decide whether or not to support the crackdown. They cannot do it on their own, so be sure to write your local government officials and voice your opinion.