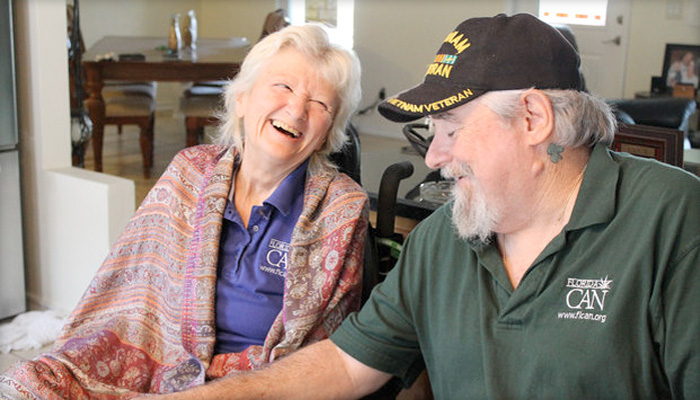 by Zach Reichard on February 27, 2013
ShareTweet

The Miami Herald announced a new poll on Monday that showed 7 in 10 Florida voters support a state constitutional amendment legalizing medical marijuana, while only 2 in 10 opposed completely.

According to the poll, conducted by a group making an effort to put a medical marijuana measure on the 2014 ballot, the support is enough to possibly affect the governor’s race.

The article mentioned that Florida Sen. Jeff Clemens (D-Lake Worth) is planning to introduce his “Cathy Jordan Medical Cannabis Act,” that would legalize the use of medical marijuana by qualified patients.

Cathy Jordan, the woman the bill is named after, has advocated for pot for 16 years in Florida and uses the plant to take the edge off the symptoms of her Lou Gehrig’s disease.

Cathy Jordan has been dealing with the symptoms of amyotrophic lateral sclerosis (ALS), otherwise known as ‘Lou Gehrig’s Disease’, since 1986 and is wheelchair-bound, using medicinal cannabis to ease her symptoms.

Just hours after the article ran, a team of militaristic officers surrounded Cathy’s house. They raided the residence, seizing 23 marijuana plants. Authorities were purportedly alerted of suspicious circumstances by a real estate agent, who was conducting “routine inspections” in the area.

Growing Marijuana For Medicinal Use In Florida

“She called us when she saw something that looked funny with an extension cord, looked through the fence and saw marijuana plants,” said Dave Bristow, a sheriff’s office spokesman. He stated that when police responded to the scene, they saw the same thing as the real estate agent.

Sen. Jeff Clemens said the raid on their house infuriated him. “Do we want to be the kind of state that raids the home of a woman in a wheelchair in order to enforce outdated laws?”

“My wife is not happy,” said Robert Jordan. Robert claims he ran out of the house when officers showed up. “We have probable cause you are growing marijuana,” the officers announced. Robert admitted that he got angry with the officers explaining that the plants were medicine for his wife, “I know people use that as an excuse, but this is true.” After giving the officers consent to search the property, the officers made the seizure and removed the plants from the scene.

When did it become acceptable for the state to use militaristic force and scare tactics, to send a political message? The Manatee County Sheriff, Brad Steube, used scarce law enforcement resources to separate a terminally ill woman from the only medication that gives her some relief during the day. Not only did he come and take the plants, they did it wearing ski masks pointing automatic weapons.

After Confiscating Everything, The Police Made No Arrests

Although current law in Florida states that the possession of less than 25 plants is a felony punishable by up to 5 years in prison and a $5,000 fine, police made no arrests. Bristow said that the sheriff office’s response to the Jordan’s home was unrelated to the proposed legislation or the couple’s support for medicinal marijuana. “Responding deputies were not aware of any legislation. Why would we want to get involved in that? We had no choice as far as what we had to do here,” Bristow said. “They had marijuana. Marijuana is illegal. We confiscated the marijuana.”

The case is being sent to the State Attorney’s Office for review.