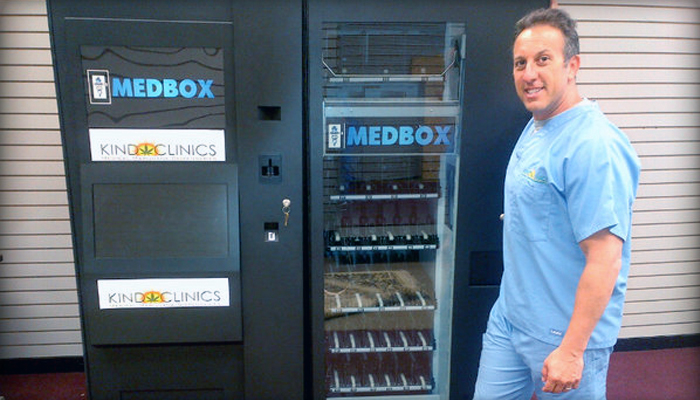 MedBox Inc., the leader in biometrically controlled dispensing and storage systems, has plans to launch 30 branded dispensaries in San Diego.

Although delivery service dispensaries in San Diego are hardly clinging to life, a proposed ordinance could possibly allow for as many as 100 storefronts to open in the near future. The ordinance would allow many dispensary owners to re-open businesses, and would pave the way for other entrepreneurs looking to get involved in the industry.

One such company that has their eye on San Diego, MedBox Inc.(OTC Pink: MDBX), programs and manufactures medical marijuana vending machines. The publicly traded firm saw their shares skyrocket up to 3000% the week after the election was called. MedBox uses the latest vending machine technology in conjunction with biometric systems in order to keep track of sales operations. This groundbreaking system may allow MedBox to meet the demands of the market just in time for favorable legislation to welcome its arrival. The San Diego council will hear out public testimony and vote on the ordinance in a meeting next Monday, March 25th.

Not Your Average Vending Machine

The MedBox is initiated by the users finger print identification in combination with patient number in order to regulate patient’s access to marijuana. Similar to an ATM for prescriptions, with the scan of a state-issued medical marijuana card, the MedBox software is specifically designed to interpret doctors, patient, and prescription information in order to properly distribute the right amount and type of medication.

“Our technology is the safest, most secure, most legally compliant way to store inventory, control and dispense medication.”– Dr. Bruce Bedrick, CEO

According to an article on Yahoo! Finance, the company’s are aimed at pharmacies, assisted living facilities, prisons, hospitals, doctors’ offices, and alternative medicine clinics to manage possession of sensitive drugs. The product will comply with all the California laws and prevent fraud, all while reducing cost by lowering overhead, tracking inventory and simplifying accounting.

In addition, the management team possesses a cumulative 100 years of C-level executive experience at Walgreens. This gives them a huge advantage over other companies trying to break into the pharmacy business. MedBox has the ability to evolve the way that traditional pharmacies such as CVS and Walgreens dispense their pharmaceutical products as well.

MedBox inc. seems to be on the fast track to success due to a number of moves made recently by corporation including a multi-million dollar deal with Entrepreneur magazine. According to MedBox Inc’s press release, MedBoxinc.com has also announced that they plan to drop as many as 30 units in San Diego alone. The company is already securing leases in the city and claims to have already received deposits from 12 locations. The startup fee of $150,000 per box includes assistance obtaining zoning permits, construction, build-out, and of course, a MedBox.

“Our company identifies the best opportunities for our clients, while still being committed to legitimizing authorized use of the product and creating a balanced and properly regulated industry.” – Dr. Bruce Bedrick

MedBox CEO, Dr. Bruce Bedrick, made it clear in a FOX Businessinterview that the vending machines are not freestanding like ATM’s or any typical vending machines. Instead, they are designed to sit behind the counter of pharmacies as a tool to store and dispense inventory. “Our technology is the safest, most secure, most legally compliant way to store inventory, control and dispense medication,” said Bedrick.

The CEO has wasted no time going state-to-state, testifying in front of state judicial committees in hopes of convincing them to implement MedBox’s system their respective states as well.

“Our local attorney tells us that the City of San Diego will be limiting the total number of dispensaries based on zoning regulations and it is expected that only 100 will be allowed for the entire city,” said Bedrick. “Our company identifies the best opportunities for our clients, while still being committed to legitimizing authorized use of the product and creating a balanced and properly regulated industry.”

MedBox has offices all over the world, including Tokyo, London, Toronto, Massachusetts, Connecticut, New York, Arizona and a corporate headquarters in Los Angeles.