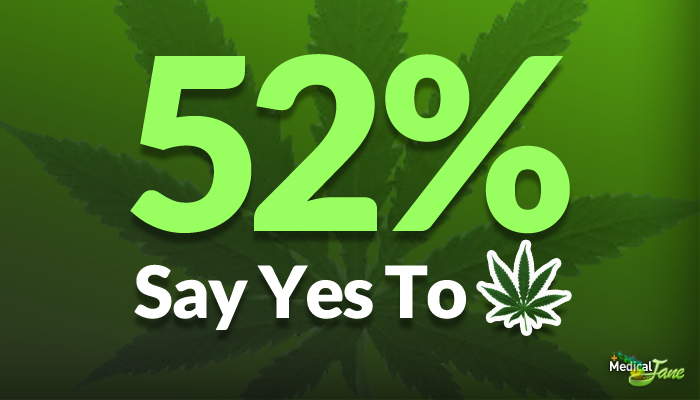 A recent survey conducted by the Pew Research Center (Pew) found that 52% of Americans favor the legalization of marijuana, while only 45% believe it should remain illegal.

The 2013 Pew Research Center survey of 1,501 adults was released yesterday, April 4, and was conducted from March 13th to the 17th. The survey concluded that the “Millennial’s” – born after 1980 and are now between the ages of 18 and 32 – are the most likely supporters of legalization, with 65% in favor of legalization. This number is nearly double what it was just four years ago (36% support in 2008).

However, it seems that the Millennials are getting through to their grandparents, as 50% of Boomers – born between 1946 and 1964 – are now in favor as well. This is significant considering that number dipped as low as 17% in 1990.

“Generation X” have seen first hand the benefits of medicinal marijuana, as more and more Baby Boomer’s look to cannabis instead of chemotherapy. The increase in support for legalization from “Generation X” – born between 1965 and 1980 – has nearly doubled in the last decade, from 28% in 1994 to 54% in 2013.

The Pew Research Center survey found that 48% of respondents have tried marijuana at least one time in their life, and 1% don’t know or can’t remember if they have or not. Party on Wayne.

“Of the 48% of respondents who have ever tried marijuana, 70% of them agree that cannabis should be legal.”

Of the 48% of respondents who have ever tried marijuana, 70% of them agree that cannabis should be legal. Those who have never tried cannabis in their life increased their support for legalization from 25% in 2010 to 35% in 2013. The survey also found that only 38% of people believe that marijuana use leads to harder drugs, and 47% (of past year users) claim they use cannabis “just for fun.” Pew conducted the same survey in 1977 in which 60% said that cannabis use led to harder drugs.

Furthermore, attitudes on whether smoking pot is morally wrong, or even a moral issue at all, have changed since 2006. Only 32% believe that smoking marijuana is morally wrong, as opposed to 50% just four years back. The amount of people that have realized using cannabis is not an issue of morality has risen 15 points, from 35% to 50%.

Americans Agree War On Drugs Is An Expensive Failure

Although there were differences in opinion between the Republican (60% opposition) and Democrat (59% in favor) respondents on the legality of cannabis, the majority of respondents agreed that the government’s efforts to enforce marijuana laws cost more than they are worth. In fact, 72% percent of the survey’s respondents felt this way (R: 67% D: 71%).

“[T]he study found that 77% of Americans now agree that cannabis does in fact have medicinal benefits.”

Lastly, the study found that 77% of Americans now agree that cannabis does in fact have medicinal benefits. This is compared to the 16% who claimed that cannabis has no legitimate medical use.