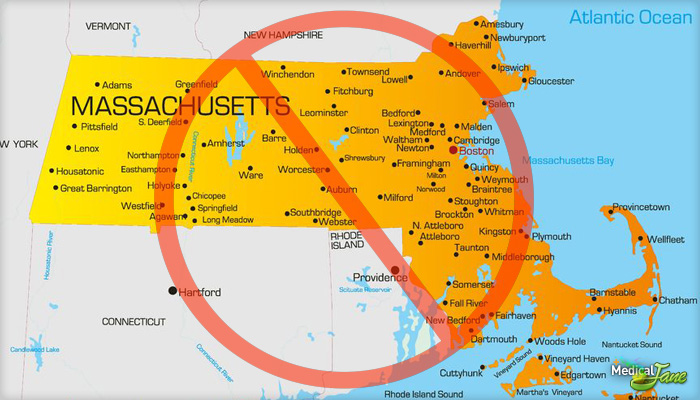 A hearing will be held on Monday, May 6 at the Massachusetts State House to consider a bill that would abolish the states medical marijuana program.

More than sixty percent of voters approved Question 3 last November, making Massachusetts the 18th state to allow medical marijuana (with only 37% voting against). On Monday, the Joint Committee on Public health will be hearing Senate Bill 1031, a bill that would severely limit safe access for Mass. MMJ patients.

Senator John F. Keenan (D-Quincy) is a co-chair on the Joint Committee on Public Health, and is a renowned adversary of sensible regulation in the state. He is the one spearheading the attempt to restrict safe access and now has 11 cosponsors for SB 1031.

SB 1031 Is Overbearing & A Step In The Wrong Direction

Senate Bill 1031 would limit the number of permitted dispensaries and cultivation sites to 10 statewide and require a $25,000 fee for cultivation licenses, cap salaries of anyone who works in a dispensary or cultivation operation, limit patients to two ounces per month, and would restrict the autonomy of doctors to prescribe marijuana as they see fit.

“We are concerned that debilitating has been defined too narrowly.” – Linda Brantley

The bill would limit the list of qualifying medical conditions to the following 8 illnesses; cancer, glaucoma, HIV/AIDS, hepatitis C, amyotrophic lateral sclerosis (ALS), Chron’s disease, Parkinson’s disease, and multiple sclerosis (MS). Patients would no longer be able to site things like chronic pain, PTSD, insomnia and a number of other conditions that many patients treat with cannabis.

“We are concerned that debilitating has been defined too narrowly, as medical marijuana has proven effective as a preventative measure for people struggling with nausea from chemotherapy, and from some of the after effects of cancer as well, including chronic pain,” stated Linda Brantley, President of the New England Coalition for Cancer Survivorship (NECCS).

“I want to make sure that medical marijuana is available to my fellow service members coming back from deployment who suffer from PTSD and other combat related conditions.”– Scott Murphy

The Department of Public Health (DPH) held its final public hearing on the draft regulations for the MMJ program on April 22. Scott Murphy, a disabled combat veteran, spoke out at the meeting and reiterated Brantley’s concerns, “I want to make sure that medical marijuana is available to my fellow service members coming back from deployment who suffer from PTSD and other combat related conditions.” Scott concluded by saying, “The decision about appropriate medical use should be up to doctors and patients, not restricted through regulations.”

Furthermore, why would you ever put a cap on salaries for people sticking out their necks and operating in one of the riskiest markets one can enter as an entrepreneur? These people risk everything for the sake of providing safe access to cannabis, why are we punishing them for that? This bill will only work to discourage well-qualified entrepreneurs from entering the market.

Mass. Residents Must Speak Out Against Senate Bill 1031

Considering the amount of time Massachusetts has put into enacting sensible legislation, it would be a shame to see them take a step backwards by passing this bill. The Massachusetts Patient Advocacy Alliance released a statement on their website a few weeks back: “After four months of soliciting input from all stakeholders in the state, the Department of Public Health has almost finished with writing regulations for the initiative approved by the voters. Let’s let the state move forward with implementing the safest and most secure medical marijuana law in the country rather than starting all over again from scratch.”

Opponents are urging Massachusetts residents to write to and call their local lawmakers to urge them to vote against the bill (find phone numbers for your local officials here). MMJBusinessDaily has provided a sample letter written by Tim Keogh, of Bristol County. He is working with a group who is waiting to submit their application for opening a dispensary in Bristol, and created this letter to express his disapproval. All you have to do is enter your information and edit it how you see fit. Remember, be polite and respectful, you are not only representing patients in Massachusetts, but the cannabis community as a whole.

The Joint Committee on Public Health is scheduled for 10 am on Monday, May 6.