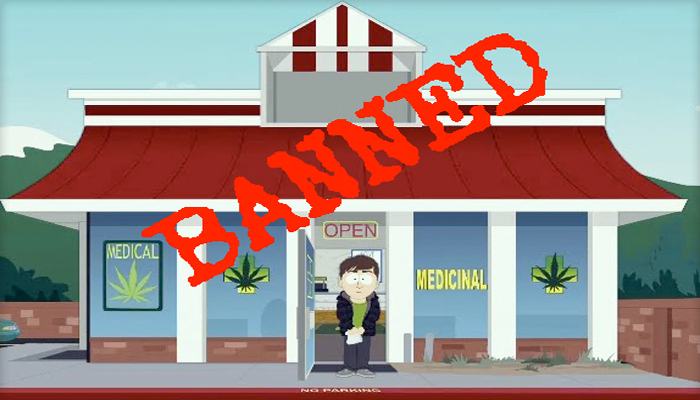 Despite a 1996 state law that permitted the use of medical marijuana for medical purposes, the California Supreme Court unanimously ruled in favor of local municipalities right to ban medical marijuana dispensaries earlier today.

The main issue in the case, Inland Empire Patients Health & Wellness Center, Inc., was whether California’s medical marijuana statute preempts a local ban on dispensaries. The court ruled in a 7-0 decision that it doesn’t. Neither the Compassionate Use Act of 1996 (CUA) nor the Medical Marijuana Program (MPP) expressly (or impliedly) limit the authority of local municipalities to enact their own ordinances to regulate the use of the land within their borders.

“We cannot lightly assume the voters or the Legislature intended to impose a ‘one size fits all’ policy, whereby each and every one of California’s diverse counties and cities must allow the use of local land for such purposes.”– Justice Marvin R. Baxter

The court cited the California Constitution, which recognizes the authority of a county or city to “make and enforce within its limits all local, police, sanitary, and other ordinances and regulations not in conflict with general laws.”

“[W]hile some counties and cities might consider themselves well suited to accommodating medical marijuana dispensaries, conditions in other communities might lead to the reasonable decision that such facilities within their borders, even if carefully sited, well managed, and closely monitored, would present unacceptable local risks and burdens,” wrote Justice Marvin R. Baxter in the final court analysis.

Justice Baxter added, “we cannot lightly assume the voters or the Legislature intended to impose a ‘one size fits all’ policy, whereby each and every one of California’s diverse counties and cities must allow the use of local land for such purposes.”

How Will This Ruling Affect My Local Dispensaries?

According to Americans for Safe Access (ASA), nearly 200 local governments in California already have bans in place for storefront dispensaries. After the ruling there is a good chance that number will increase. Many cities in California were just waiting for a Supreme Court ruling to enact bans of their own.

The ruling will not be an issue for cities that have regulated dispensaries already in place. However, cities like San Diego and Los Angeles will most likely be affected the most by the ruling because there are no regulations in place. Especially in San Diego where the city council just recently (April 23) denied permits for marijuana dispensaries within city limits on.

Advocates fear that the ruling only undermines the original intent of the states MMJ law, which was to provide a uniform safe access to medical cannabis. Patients in cities with bans in place will be forced to drive long distances to obtain their medicine.

Of course, that’s if the medical marijuana delivery services don’t pick up the slack.