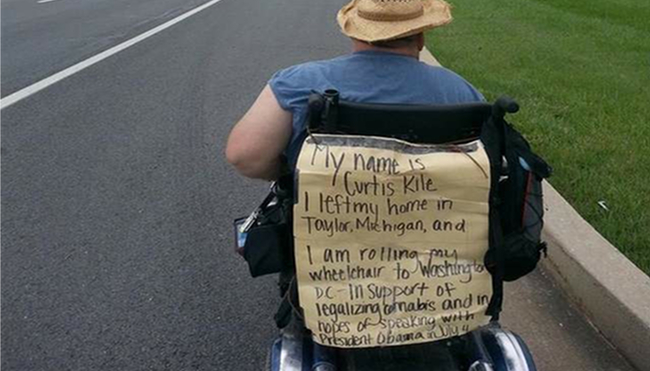 Man In Wheelchair Rides To Washington For Cannabis

In an effort to push for the legalization of cannabis, a 52-year-old from the suburbs of Detroit is traveling by motorized wheelchair all the way from Michigan to Washington, D.C..

Curtis Kile’s journey began back on June 14th when he set out on a mission to convey the idea to President Barack Obama that the legalization of cannabis would give people more safe, affordable access to medical marijuana.

Kile’s, who uses cannabis to control his muscle spasms and other symptoms caused by his cerebral palsy, hopes to speak directly with President Obama on July 4th.

“The alcohol industry doesn’t want it legal, and the parmaceutical and the tobacco companies don’t want that, because it’s going to bite into their profits.” – Curtis Kile

“The alcohol industry doesn’t want it legal, and the parmaceutical and the tobacco companies don’t want that, because it’s going to bite into their profits,” Curtis told the Detroit Free Press. “It’s the money that’s stopping it, and that’s wrong.”

A White House press aide has reported that Obama’s holiday schedule has nothing about visitors from Michigan, while some reports say that the president plans on hosting a birthday party that day for his eldest daughter, Malia.

Kile was in Hagerstown, Md., over the weekend where he was stopping on the sidewalk to speak with anyone who cared to listen. “The younger ones, they just give us a thumbs up, but the older ones come over and say they agree with me. And ‘be safe on your journey,’ a lot of them say.”

We certainly appreciate what Kile is doing for the movement regardless of whether he gets to speak with Obama, and we wish him and his son safe travels for the rest of their trip.