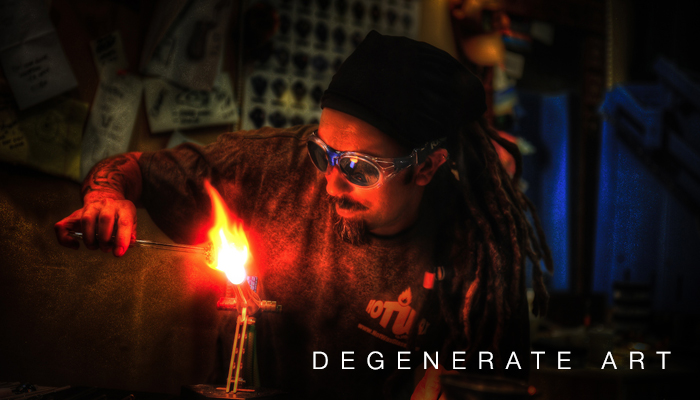 Degenerate Art: The Art and Culture of Glass Pipe-Making

Degenerate artis the direct translation of the German ‘Entartete Kunst’, a term coined by the Nazi regime to describe all art that was deemed modern, demeaning, or rebellious.

Entartete Kunstwas also the title of a traveling art exhibition that premiered in Munich on July 19, 1937, and remained open until November 30 before making its way to eleven other cities across Germany and Austria.

The degenerate art featured in the show was a collection of over 650 works Hitler ordered to be seized from museums and art collections throughout the German Reich.

The collection included the works of notable artists such as Nolde, Heckel, Ernst Ludwig Kirchner, Max Beckmann, Henri Matisse, Pablo Picasso and Vincent van Gogh, to name a few. Any art that was considered un-German or Jewish in nature was banned, and the artists responsible were subject to punishment.

Slogans such as, “Nature as seen by sick minds” and “Deliberate sabotage of national defense!” were splayed across the plain walls in an attempt to sway viewers perception of the art.

Fast-forward to nearly eighty years later, and paintings done by the very same artists from that period are selling for hundreds of millions of dollars. In hindsight it’s clear that these artists — many of which were German — were not threats to national security, nor were they sick minded. Well… maybe van Gogh got a little creepy with the whole ear thing… Nevertheless, I digress.

These extremely talented artists were painted as a threat to German culture and terrorists of the state.

Does this story sound familiar to anyone? If you are not drawing parallels to the glass pipe-making movement in America, then you need to watch this documentary…

Degenerate Art: The Art and Culture of Glass Pipes

Degenerate Art is a documentary by American glassblower and filmmaker, Marble Slinger. The film happens to be the artist’s first feature film, but it is apparent from the opening scene of the movie that Slinger’s talent extends beyond his astonishing glass blowing abilities.

The opening credits begin with mysterious and silent stills of a vacant workshop that looks like a set from Breaking Bad. The edges of dull, industrial looking tools shine in the one sliver of light beaming through small window across the dark room. The music fades in as a single light suspended crookedly between two 2×4 flickers on to reveal a ceiling reminiscent of an unfinished basement.

Gaskets are thrown open and gas begins to flow as the camera pans slowly over a cluttered workbench covered with segments of glass tubes and unfamiliar tools. A lighter flicks to ignite the gases flowing from the torch, bursting them into a brilliant flame of yellow and blue.

The dark and mysterious imagery sets the mood perfectly for an incredible sneak peak into one of America’s last underground industries, glass pipe making.

The documentary follows some of the biggest names in the industry, including Paul Trautman & Abe Fleishman of Northstar Glassworks, Ryan Teurfs of 101 North Glass, Alex Griffin of Headdies.com, Jason Harris & Saeed Mothadi of Jerome Baker Designs (JBD), the godfather of pipe making, Bob Snodgrass, and many more.

Slinger starts the film by telling the story of a hippie glassblower named Bob Snodgrass who accidentally discovered fuming with his “color-changing” pipes. He then works his way through the history of pipe making by explaining how it grew in popularity, innovated itself & evolved into the multi-million dollar industry it is today.

The film makes it clear that because of federal laws and crackdowns such as Operation Headhunters & Pipe Dreams, the industry has been pushed underground for the majority of its being.

One part in particular that stood out for me was when Ryan Teurfs of 101 North Glass and Jason Harris & Saeed Mothadi of Jerome Baker Designs were interviewed about their experiences being raided during Operation Pipe Dreams.

“Sorry for marketing, sorry for being a salesperson… caring about my employees, giving people work, paying taxes and doing everything that Americans are supposed to do.” – Saeed Mothadi, JBD

Saeed sums up the madness of the situation by sharing a quote from John Ashcroft — the U.S. Attorney General at the time — that aired shortly after the raids, “Today we took down 50 organizations that support terrorism.”

Terrorism… Really? Now you see why I told the story of Entartete Kunst…

These men and their businesses were terrorized because the government didn’t have total control of the sale of pipes online. These artists were clearly not terrorists; these were respected businessmen who paid over a million dollars per year in salaries plus full medicinal benefits. Unfortunately, the federal government’s definition of “drug paraphernalia”

“Sorry for marketing, sorry for being a salesperson… caring about my employees, giving people work, paying taxes and doing everything that Americans are supposed to do,” said Saeed sarcastically.

They were arresting artists based on the crimes that the future owners of the pipes might commit. This would be no different from the Government suddenly shutting down Cutco because they make sharp knives that might be used to stab someone someday; its pure insanity.

These people were demonized and pressured into pleading guilty or risk facing a five-year mandatory sentence for each charge — 15 total years. They were told that if they pled guilty, their charges would be reduced to three years. The men agreed, and went into court not really knowing what to expect. What they did know, is the judge ruling over the case had previously sent Tommy Chong to jail for 9 months on similar charges, so they were expecting some jail time.

Much to their surprise, they were luckier than Tommy (they used Tommy because of his big name). Instead of jail time, the men of Operation Pipe Dreams were sentenced to 6 months of house arrest, probation for 3 years, and 100 hours of community service. All of the money seized from their accounts was taken — which amounted to hundreds of thousands of dollars — and everything they had built up was now gone.

These artists were part of a massive conspiracy by the DEA and federal government to slow the rapidly flourishing culture that surrounded pipe making and cannabis in general.

Slinger ends the documentary at the 2012 C.H.A.M.P.S. Glass Games– pretty much the Super Bowl of glassblowing — showcasing the lack of success on part of the DEA to subdue this irrepressible culture.

Degenerate Art Is A Must Watch

We strongly encourage everyone to give Degenerate Art a watch. I believe that it will go down in the books as the defining documentary of an entire industry and culture; similar to the way Exit Through The Gift Shop shed light on the culture surrounding street art.

It is important not to let terms such as “pipe” and “paraphernalia” undermine the true art that can be appreciated beyond the bowl and mouthpiece of smoking devices. Slinger wanted to show the world that there is also a whole art movement happening beyond the pipe, and I think he far exceeded his aspirations. Respect.

Perhaps someday history will even repeat itself and artists like Bob Snodgrass & Jason Harris will join the ranks of the greats before them such as Picasso and van Gogh. I’m sure if you asked some of the younger talents in the game, they would tell you that in their eyes, they already have.