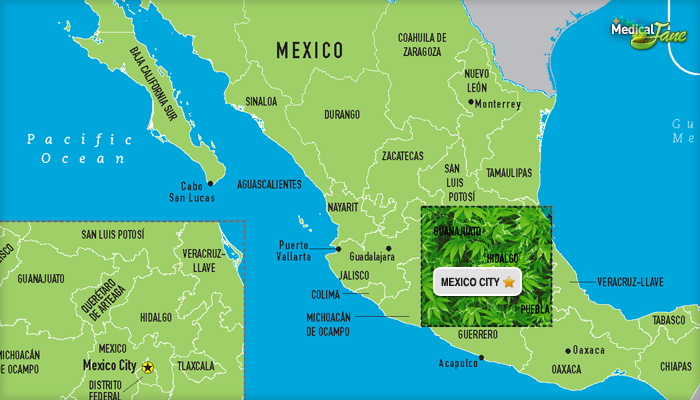 According to a census conducted in 2010, Mexico City has a population of 8.85 million, which makes it the largest city in North America – New York City is second with 8.19 million. Despite its position as the capital of Mexico, a conservative country to say the least, Mexico City has “passed a number of socially liberal reforms, including the legalization of abortion and same sex marriage” in recent years, according to Time World.

In the Time piece, Ioan Grillo discusses plans for Mexico City Legislators to introduce another series of liberal bills later this month. This time, however, they aim to legalize and regulate cannabis in the city. Under the proposed legislation, it would be legal to carry up to 30 grams of cannabis. The bills will also include provisions for collectives, similar to those found in the California medical marijuana scene.

The push for legal cannabis in Mexico City was seemingly influenced by similar moves in neighboring countries. It comes shortly after Uruguay legalized cannabis throughout the country, and Washington and Colorado did the same nearly a year ago. Surely, legalizing cannabis in North America’s largest city would add some momentum to the growing trend.

A Mexican law passed in 2009 made it federally illegal to sell cannabis. The lawmakers responsible for the new bills aim to get around the law by using a “cannabis club” structure. Instead of conducting day-to-day sales, up to 100 members would pay a subscription and receive about 50 grams of cannabis each month.

“We look foolish trying to be champions of prohibition, when the United States is legalizing.”– Vidal Llerenes

CuPIHD is a Mexican drug policy reform group, and they have done a great deal of research on the cannabis club structure, according to Time. The group believes 70% of Mexico City’s legal marijuana market, estimated to be worth $30 million, could be comprised of the membership-based collectives.

CuPIHD director Jorge Hernandez believes cannabis clubs allow for regulation without profits. As he told Time World, “They can open a space to show that regulation is better than denial and failed prohibition.” His concern for the lack of profits is warranted when you consider the billions of dollars made by Mexican drug cartels each year.

Any bills passed in Mexico City would be in direct conflict with federal law and any clubs could be subject to government interference. Assemblyman Vidal Llerenes is working on the new legislation and feels the US government’s recent decision to respect state cannabis policies could influence the way Mexico proceeds. “We look foolish trying to be champions of prohibition, when the United States is legalizing,” he said.

We often only consider the immediate impact of decisions, and such is the case for many cannabis advocates. With that said, it’s hard to overlook the relationship between domestic and foreign cannabis policies. Legalizing cannabis in Mexico is likely to open the floodgates, so to speak. It’s hard to imagine that the largest city in North America would fail to make waves if regulations are passed.