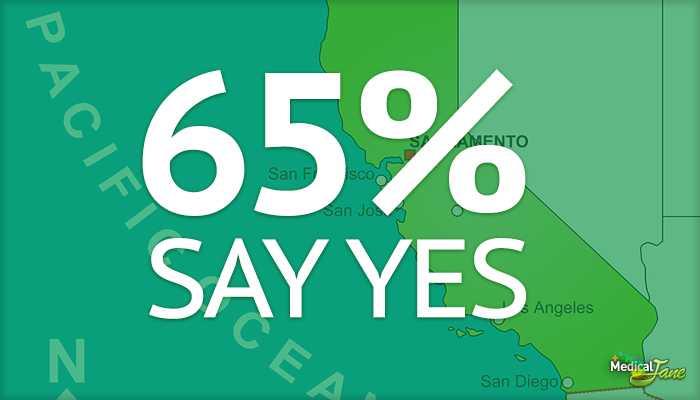 California Lt. Governor Gavin Newsom and Americans for Civil Liberties Union representatives released the results of a recent California poll in a news conference Thursday. The poll, which was conducted by Tulchin Research, found that 65% of prospective California voters would support regulating cannabis in a similar fashion to alcohol.

“65% of prospective California voters would support regulating cannabis in a similar fashion to alcohol.”

Tulchin Research conducted the survey from September 26 – October 6, 2013. In doing so, they performed professional phone interviews with 1,200 California residents likely to vote in the November 2016 election.

The study was intended to gauge support for California marijuana legalization. Specifically, interviewers proposed a measure that would legalize, regulate, and tax cannabis for adult use in the state. There would be penalties for DUI under the measure as well.

The Tulchin Pollalso outlines an estimated $1 billion in tax revenue as a result of the proposed regulations. The money, in turn, would be used to fund essential services like education and public safety.

The results of the Tulchin Poll are telling – 65% of responses were in favor of legal marijuana in California. Further, there is little noticeable variation between demographics.

According to the poll, nearly 3/4 of Democrats (74%) and Independents (71%) support the outlined cannabis regulations. Republicans, on the other hand, were split (47% support – 50% oppose).

Also, there is majority support for legal cannabis regardless of racial demographic. More than 2/3 of Asians (68%), Caucasiains (71%), and African Americans (74%) support the proposed ballot measure. Latinos (54%) displayed the least support of the races recorded.

Similarly, the study found majority support in various age demographics. Participants 18-29 (85%) exhibited the most support, whereas the 40-49 demographic (54%) showed the least. The poll suggests nearly 2/3 of seniors (63%) support the measure as well.

The Tulchin Research poll was further analyzed in regards to the geographical location of each individual surveyed. According to its findings, majority support for policy changes is found throughout California.

The Bay Area (73%) exhibited the most support of the included regions, with San Diego (67%) as a close second. 63% of voters in Los Angeles County said they would support the measure as well.