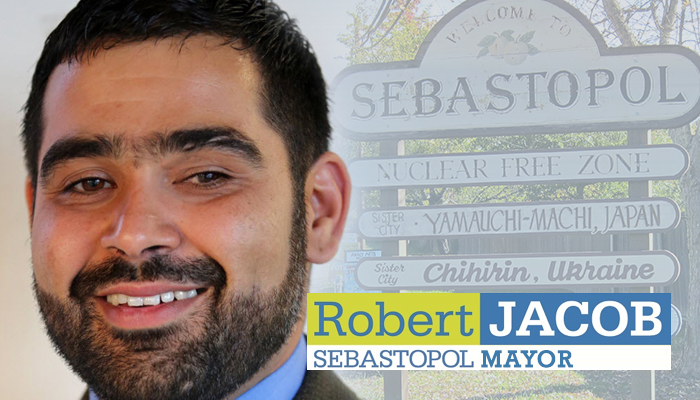 The Sebastopal, California City Council voted Tuesday to appoint Vice Mayor Robert Jacob as Mayor. In addition to his role in public service, Jacob is the founder and director of Peace in Medicine – a medical cannabis collective with two locations in northern California.

“We can shape a better world for ourselves.” – Robert Jacob

Mayor Jacob founded Peace in Medicine in 2007 and began serving on the Sebastopal Planning Commision in 2011. He then went on to run a successful campaign for Vice Mayor the following year.

“My life has been about service,” Mayor Jacob explained. “By addressing social problems such as homelessness, HIV/AIDS, and access to medical cannabis, we can shape a better world for ourselves.”

“As mayor,” he continued, “I will work to facilitate even greater changes to public policy, from affordable housing and safe routes to schools to supporting real immigration reform. There is so much we can and must do to improve our communities by working at the local level.”

Previously, Mayor Jacob has worked to develop statewide regulations for dispensaries in California. He has helped officials in cities like San Jose, Stockton, Sacramento, and Napa establish local regulations as well.

“The medical marijuana community has political strength and the influence to elect advocates to public office.”– Don Duncan

Furthermore, Jacob serves of the Sebastopal Business Outreach Committee and the Legislative Committee. He also is a member of the Chamber of Commerce. It should be noted that Jacob was recently named in the North Bay Business Journal “Top 40 Under 40” as well.

Advocates of medical cannabis point towards Jacob’s election as Mayor as a sign that progress is being made. Don Duncan, California Director with Americans for Safe Access, explained that the result brings “additional legitimacy to patient community.”

“This historic, unprecedented vote in Sebastopol illustrates that the medical marijuana community has political strength and the influence to elect advocates to public office,” Duncan said.