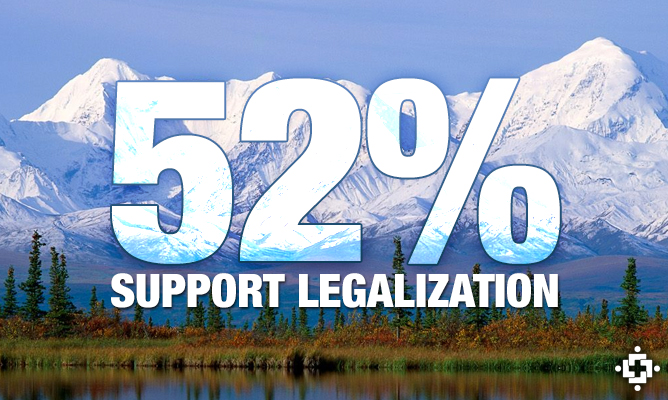 This August, a third state may finally join Colorado and Washington in the history of the legalization of marijuana. An Alaskan poll released last week suggests that majority (52%) of voters are in favor of regulating and taxing marijuana similar to alcohol.

Alaskans Lead The Campaign To Regulate Marijuana Like Alcohol

In early February it was announced that the “Campaign to Regulate Marijuana Like Alcohol in Alaska” reached the signature threshold required by state election law. Accordingly, the issue was set to be included in the August 19 primary ballot.

It should go without saying that this represented a huge step toward legalization in Alaska. In fact, it is the only state to have gathered enough signatures thus far to put legalization on the 2014 ballot.

As the month of August approaches, support for the initiative seems to be on the rise. Dittman Research conducted a statewide poll from March 4-9, fielding responses from a sample of 800 Alaskans across the state.

“52% of those surveyed were in support of legalization, while 44% opposed the measure.”

In reference to the Campaign to Regulate Marijuana Like Alcohol in Alaska, one of the questions asked was about the legalization of cannabis in Alaska.

52% of those surveyed were in support of legalization, while 44% opposed the measure. The remaining 4% was undecided. Although the results are not exactly overwhelming, there are still many months to come for the initiative to garner more support.

If the initiative is passed in August, Alaska will officially become the third state to legalize cannabis for adult use. Possession of up to an ounce of marijuana and as many as six plants would be allowed to adults 21 years of age and older.