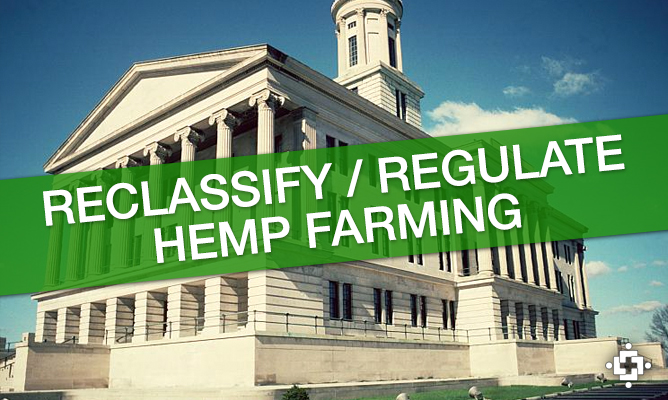 NASHVILLE, TN – On Wednesday, the Tennessee Senate passed both Senate Bill 2495 and House Bill 2445 in order to reclassify and regulate industrial hemp. The measure is now on its way to the desk of Governor Bill Haslam for his signature in order for the measures to officially become law.

Senate Bill 2495 and House Bill 2445 were both passed unanimously in the Tennessee Senate this Wednesday, and now await the signature from Governor Bill Haslam. The measures will reclassify cannabis that contains less than 0.3 percent of THC as a crop instead of a controlled substance.

If signed into law by Governor Haslam, Tennessee farmers could only use hemp for the purposes of research and development. The bill requires the Department of Agriculture to develop licensing guidelines and to enact them within 120 days after passage.

According to the Congressional Resource Service, the United States is the lone developed country that does not allow the cultivation of industrial hemp as an economic crop despite the vast history hemp has had in the country.

However, earlier this year Congress approved language in a federal Farm Bill, which would allow the cultivation of industrial hemp in the state’s agricultural pilot programs that have already passed hemp legislative measures.

Hemp Is Currently Only Illegal For Farmers To Raise It

Senator Frank Niceley (R-Strawberry Plains), one of the two primary sponsors for HB 2445, stated when he first drafted the bill, “hemp is legal. You can import it. You can export it. You can buy it. You can sell it. It’s only illegal for a farmer to raise it. I want to change that.” Niceley believes that hemp is a viable crop for farmers and that there is a lot of money to be made with the industry.

The movement to welcome the crop once again in the United States is gaining ground as Tennessee looks like it will become the 14th state to allow cultivation and regulation of industrial hemp. Other states that have removed the barriers from hemp production are California, Kentucky, Colorado, Vermont, Washington, Maine, Montana, Virginia, North Dakota, Oregon and also Utah, Indiana and most recently Nebraska.

Furthermore, it is important to note that as of February 26, 2014, there has been 63 bills addressing the cultivation of industrial hemp in the country, and has been introduced in 28 different states. As more and more states start to acknowledge the variety of industrial uses and environmental benefits of utilizing hemp, 2014 may see even more different states introducing hemp measures for research and production.