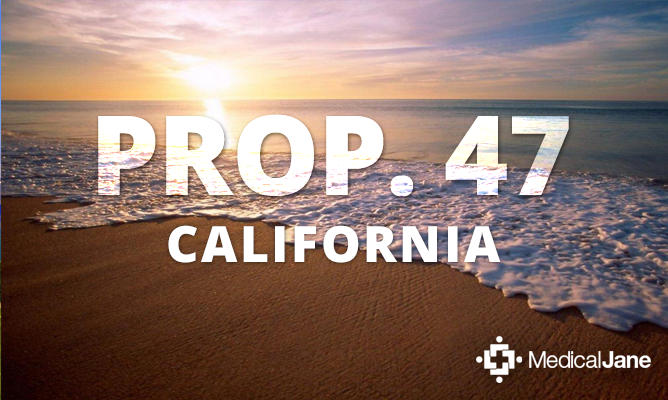 Californians voted in favor of Proposition 47 thus reducing jail time for many drug related offenses in the state.

People incarcerated for non-violent crimes such as possession of drugs, shoplifting (when the amount involved is less than $950), and check and credit fraud will see the mandatory sentence reduced from a minimum three years to one year. Those with a history of violence and sexual assault will not be eligible for the lighter one year sentence, however.

While marijuana possession in the state is already listed as a misdemeanor or infraction, this new ballot measure could affect how drug cases involving marijuana concentrates such as wax and hash are handled. These concentrates have been listed as felony drug charges in the past. Other drugs removed from the mandatory felony list under this proposition include heroin, cocaine, LSD and methamphetamine.

As many as 10,000 prisoners may be eligible for early release under Proposition 47. Proponents of the measure are hoping these new lighter sentences will lessen the financial burden on the state caused by incarcerating people sentenced for non-violent and non-serious crimes.

The Legislative Analysts’s office estimate that the savings could reach the low hundreds of millions and this money is set to be diverted to school truancy and dropout prevention, mental health and substance abuse treatment, and victim services.

Supporters of the proposition to reduce prison sentences included some famous faces. At a concert in August at the Rose Bowl in Pasadena, California Jay Z spoke to the crowd about voting yes on the measure. “Prop 47, California: Build more schools, less prisons,” Jay Z said. “More schools, less prisons, California. They’ll never be able to stop us.” Surprising to many, Newt Gingrich also expressed his support of the proposition in an op-ed article he co-authored in the L.A. Times earlier this year. He wrote, “Prisons are for people we are afraid of, but we have been filling them with many folks we are just mad at.”

Many see this new proposition as one step closer to ending the infamous War on Drugs.