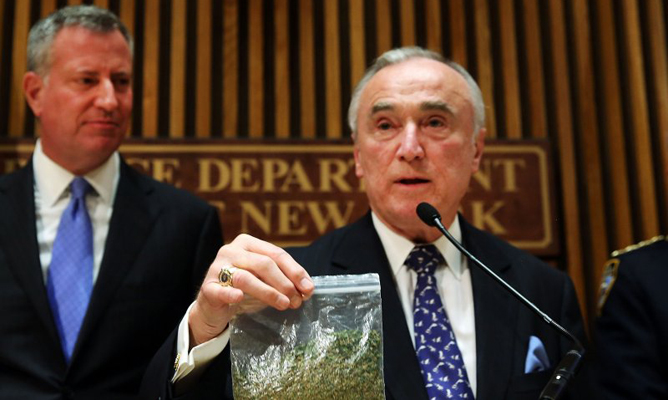 Less Stress Ahead for N.Y.C. Residents

New York’s Mayor, Bill de Blasio, and NYPD Chief Bill Bratton are attempting to reduce the amount of misdemeanor marijuana convictions in their city with a change to marijuana law. The new law will protect individuals caught with less than 25 grams in New York City. Starting November 19 New York police officers will begin to follow this new policy when handling low-level marijuana violators.

This new change in policy does not affect the current state marijuana laws. It will only change the way police officers approach people with small amounts of marijuana. Officers cannot opt out of following this new guideline. However, if the individual in question is using marijuana in public or does not have proper identification while carrying marijuana the officer can proceed with arrest. This new change in policy will protect New York City residents carrying low levels of marijuana from receiving a criminal record and wasting law enforcement resources on processing these violations.

New York is one of 18 states that have adopted marijuana decriminalization laws. In the past, people with small amounts of marijuana faced the same judgments as any other drug offender even though it is against state law to criminalize low-level marijuana violators. The 1977 Marijuana Reform Act states that a person with less than 25 grams of “concealed” marijuana should only receive a citation. The officers bypass the decriminalization law by making the cannabis visible. The officer does this by asking the potential violator to empty their pockets or asks for permission to search the vehicle. This usually ends in self-incrimination by the violator in question showing the officer the marijuana in possession. With the new policy, even if an officer does ask an individual to “empty their pockets,” or happens to notice a baggie of marijuana in the car a citation, not an arrest is given.

The Decision to Cite

Chief Braton says low-level marijuana is equal to .88 of an ounce of marijuana, or less than 25 grams. The arresting officer will have the final word as they approach the violator while questioning the individual. At that time, the officer decides how to proceed, by either giving a ticket or by taking action that is more serious such as handcuffing, fingerprinting, and further criminal actions resulting in more fines.

When the officer chooses to write a citation, the individual receives the same treatment they would if they received a traffic violation. The individual would have to forfeit the marijuana to the hands of the officer and would receive a summons to show up in court on a later date. The first offense would result in a fine of $100 but the person will not have a permanent record of the offense.

Mayor de Blasio believes that these misdemeanor arrests are affecting the youth and minority groups in New York, having a huge impact on their future. These types of misdemeanors have a direct effect on filling out applications. This has the potential to affect people who receive the misdemeanor from keeping their student loans, getting a job, or obtaining a residence. It appears de Blasio understands that it is unfair to charge someone with a misdemeanor crime when it has to deal with the possession of small amounts of marijuana. Mayor de Blasio and Chief Braton believe this is a move in the right direction to reduce the amount of low- level possession punishments by giving a onetime fine instead of a lifetime record.