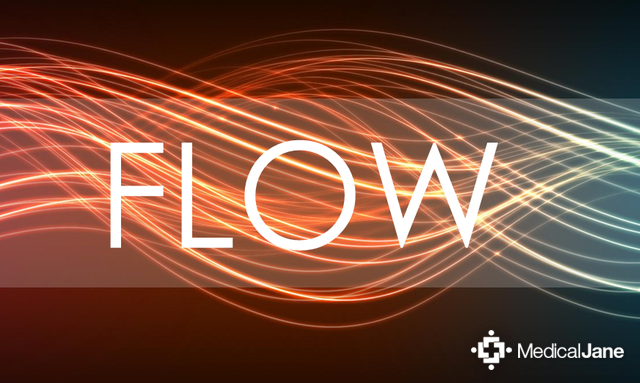 Flow: A (Desirable) Side Effect of Medical Marijuana?

A “side effect” is a secondary, unintended effect. The side effects of pharmaceutical drugs are notoriously scary, and often enough, fatal. Most anti-depressants, for example, come with the warning that, suicidal thoughts may be experienced, especially in the youth. Other common side effects of antidepressants include:

It is distressing to me that “one in five adult Americans takes some kind of mental health drug — meaning anti-anxiety, anti-depressant, anti-psychotic, etc. However, only 15 percent of people treated for depression with drugs, show long term remission.”

Not All “Side Effects” Are Negative

So, what about the side effects of cannabis? Are there any? What are some of the effects that are more subtle than munchies and couch-lock and, therefore, may be over-looked and under-leveraged? What if your MMJ card was also a temporary, voluntary gateway (if opted) to an optimal state of mind neuroscientists call “flow”?

“Going with the flow is responding to cues from the universe. When you go with the flow, you’re surfing Life force. It’s about wakeful trust and total collaboration with what’s showing up for you.” – Danielle La Porte

This suggestion is, of course, contrary to the flat caricature of the “ambition-less pothead” who can’t find motivation. Neuroanatomy may actually help explain the gravitational pull between marijuana and those who choose to consume the plant. It is the same gravitational pull felt by monks, mystics, meditators, yogis, knitters, gardeners, surfers, coders, mountaineers, skiers, writers, painters, musicians and creators who simply long for total immersion in the task and moment at hand. That is flow’s coveted reward, and cannabis’ enjoyable side effect — full involvement and deep engagement in an intrinsically rewarding task, that challenges our skill at a just-right level, and grants:

Research Shows The Bliss We Seek Is Slow, Not Fast

The brain hacks above are the result of “transient hypofrontality.” Neuroscientist Arne Dietrich made the accepted claim that all altered states of consciousness are caused by a temporary slowing down (not speeding up) of certain activities in the prefrontal cortex. This allows extreme concentration to happen that can exclude non-relevant data, while lasering in on granular insights typically unnoticed. In normal states, we don’t usually filter out life’s static consistently enough to get beyond shallow, partial awareness. But with the down regulation of the frontal lobes, tangential ideas link together more easily (lateral thinking), and in unexpected ways.

Mihály Csíkszentmihályi was impacted by the destruction he saw as a young boy during WWII, and he relentlessly asked, “What makes life worth living?” He was driven by this question, and sought to understand the roots of happiness and how, in terrible times, some could maintain their sanity, courage, purpose and meaning. His seminal research is credited with naming this field of study “flow” — the psychology of optimal experience — because so many of his interviewees described their happiest time as feeling fluid, as if being carried by a current of water.

A cascade of neurochemicals helps create the right brain ambiance. Steven Kotler and Jamie Wheal synthesized a definition for flow as an “optimal state of consciousness where we feel our best and perform our best.”

Flow states release feel-good brain chemicals, like serotonin, dopamine and anandamide that slow some functions, and enhance others. One example is the momentary quieting of the inner critic that happens while in a flow state. How freeing. And how very conducive to creative endeavors. What if your elevated mind was directed toward creativity and innovation?

If you are a medical marijuana patient whose consumed dosage gives you a felt psychoactive effect, you have a special opportunity to explore and leverage this additional aspect of your medicine. Many who yearn for the experience, are denied legal access to the exploration and expansion of their very own minds.

As the medical marijuana market matures, it’s reasonable to expect patients to become more curious about, and sophisticated with their consumption of cannabis. Stack functions, and yield multiple benefits by treating a medical condition while responsibly, productively exploring marijuana’s effect on you and optimal states.