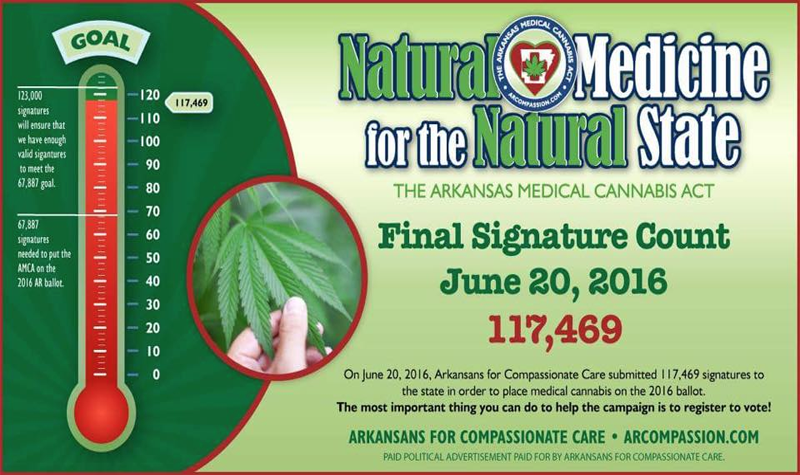 Arkansas to Vote on Legalizing Medical Marijuana Statewide in November

Voters in Arkansas are likely to be presented with a proposed ballot measure to legalize medical marijuana in the state this November, supporters say.

On Monday, Arkansans for Compassionate Care, the organization behind the proposal, submitted 117,469 raw signatures to state election officials for verification. At least 67,877 of those signatures need to be deemed valid in order to qualify for the November ballot. The Arkansas Secretary of State now has 30 days to review and validate the signatures.

“We are confident that we will qualify for the ballot and give Arkansans the opportunity to allow sick and dying patients safe and legal access to medical cannabis when their doctor agrees that it’s the best treatment option for them.” – Ryan Denham of Arkansans for Compassionate Care

Melissa Fults, campaign director for Arkansans for Compassionate Care, told the Times Record that they have verified at least 85,000 of the signatures on their own, and are confident the measure will qualify for the ballot.

“We are confident that we will qualify for the ballot and give Arkansans the opportunity to allow sick and dying patients safe and legal access to medical cannabis when their doctor agrees that it’s the best treatment option for them,” said Ryan Denham, Deputy Director of Arkansans for Compassionate Care.

The Most Comprehensive Medical Marijuana Program in the South

If the measure qualifies for the ballot and is subsequently approved by voters, Arkansas would become home to the most comprehensive medical marijuana program in the south. In addition to a vast list of qualifying conditions, the measure includes a hardship provision.

This provision will allow some patients the ability to grow their own cannabis, as well as incorporating a sliding payment scale to allow low and limited income patients the ability to afford their medicine. The proposed medical marijuana program would be overseen by the the Arkansas Department of Health (ADH), with administration of the program self-funded by moderate taxes placed on medical marijuana sales.

“Initially, up to 38 individual medical marijuana dispensaries [known as care centers] would be authorized across the state.”

Initially, up to 38 individual medical marijuana dispensaries, known as “cannabis care centers” in the proposal, would be authorized across the state. The ADH would have the authority to increase the number of cannabis care centers to ensure adequate coverage statewide, and cities and counties would be given the ability to restrict where they may be located.

Under a hardship cultivation clause contained in the proposal, patients who live more than 20 miles away from a cannabis care center, and meet certain eligibility requirements, would be eligible to apply for a home cultivation licence. The hardship cultivation would allow authorized patients to grow up to five mature cannabis plants and five seedlings in an enclosed, locked area. Home grows would need to be registered and inspected by the ADH.

Who Would Qualify for Medical Marijuana in Arkansas?

The full list of specific qualifying medical conditions for the proposed statute are:

In addition, patients would be eligible for medical marijuana in Arkansas if they suffer from a chronic or debilitating disease, medical condition or treatment that produces one or more of the following: cachexia or “Wasting Syndrome”; peripheral neuropathy; intractable pain (pain that has not responded to ordinary medications, treatment, or surgical measures for more than three months); severe nausea; seizures, including those characteristic of epilepsy; or severe and persistent muscle spasms, including those characteristic of multiple sclerosis. The Department of Health would have the authority to add additional qualifying ailments once the program is operational.

After submitting their signatures with confidence that their measure will be certified for the November ballot, Arkansans for Compassionate Care called on a competing campaign to end their signature drive and combine forces behind one medical marijuana proposal.

“Placing another cannabis proposal on the ballot will absolutely cause both to fail, and the sick and dying patients of Arkansas cannot afford to lose this battle,” Melissa Fults of Arkansans for Compassionate Care

The competing campaign, led by Little Rock lawyer David Couch, would place a constitutional amendment on the November ballot, also asking voters to decide on legalizing medical marijuana. Because Couch’s proposal is an amendment, not a statute like ACC’s, 84,859 valid signatures are required.

Supporters from Arkansans for Compassionate Care say their proposal is more comprehensive because Couch’s proposal does not allow for home cultivation in any circumstance. Uniting behind one measure will increase the odds of passage, says Melissa Fults, campaign director for Arkansans for Compassionate Care, adding that if competing initiatives are placed before voters, they are likely to be defeated at the polls.

“Placing another cannabis proposal on the ballot will absolutely cause both to fail, and the sick and dying patients of Arkansas cannot afford to lose this battle,” Fults said.

If both measures are placed before voters in November, and both are approved, then the proposal that earns the most “yes” votes will become law, according to Ballotpedia.

The 2016 Arkansas Medical Cannabis Act was certified by the Arkansas Attorney General (Dustin McDaniel) in September of 2014 and we’ve been collecting signatures ever since. In order to be on the ballot, we’ll need …