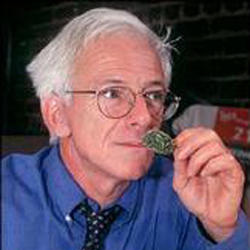 Dennis Peron is an cannabis and LGBT activist who moved to San Francisco after serving in Vietnam. He may be best known for his co-authoring of Proposition 215 – California’s Compassionate Use Act of 1996. At one point, Peron even ran in the Republican primaries.

Prior to all this, Peron ran the “Big Top marijuana supermarket” from home in the 1970′s. He played an integral role in the passage of a 1978 initiative to allow the personal use of cannabis in San Francisco. However, the initiative was never adopted by law enforcement.

Nonetheless, Dennis organized Proposition P in 1991. The measure, which passed with 79% of the vote, made medical marijuana laws the lowest priority of enforcement in San Francisco. In turn, he founded the city’s first medical cannabis club, the Church Compassion Center, in 1993.

RECAP: The Emerald Cup Celebrates Ten Years Of Growth In Northern California
SANTA ROSA, CA — Cannabis enthusiasts from all walks of life gathered at the Sonoma County Fairgrounds this past weekend to celebrate a successful harvest, while exchanging knowledge with friends new and old. Uprooting from its traditional location in the “Emerald Triangle,” the epicenter of California cannabis, The Emerald Cup migrated to Santa Rosa in 2013. Founded by Tim Blake ten years ago, The Emerald Cup is the longest running outdoor organic growing competition in the world. The flagship event was held in Laytonville, CA and drew just 23 …