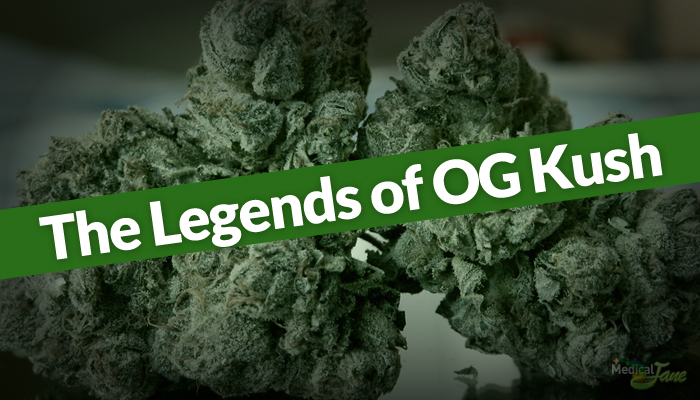 by Zach Reichard on January 05, 2013
ShareTweet

The debate over the genetics of OG Kush and what exactly ‘OG’ stands for has been a heated topic of discussion for many years. Here is what we do know.

It has gained a sort of mythical reputation and has become one of the most sought-after strains in California. Although the strain is relatively popular on dispensary menus, the extremely high demand causes some prices to get as high as $30 per gram and $80 per eighth.

OG Kush is known to be fairly difficult to grow; and will produce low yields if not grown correctly. This also makes it a risky investment for growers; and tends to drive down the supply.

Despite the drawbacks OG Kush is in high demand. People seek it out mainly because of its unique taste, scent, look, feel and euphoric high – which is definitely not for the faint of heart. The compact buds are almost neon green in color, with heavy crystallization that will leave your fingers extremely sticky after handling. When grown properly, the strain is a delicacy that deserves a spot on every cannabis enthusiast’s wish list.

While many websites and dispensaries list OG Kush as an indica, many people argue that the strain is in fact a sativa, or some sort of sativa-dominant hybrid. We can’t exactly argue with them considering the genetics are, for the most part unknown, and stem from purely myth. The thing to remember is that most of the different types of OGs are phenotypes of the original OG Kush plant from the 90’s.

A phenotype is simply a difference in the outward, physical appearance of the plant. This includes the atoms, molecules, cell structures, metabolism, and basically everything else that is a function or behavior of a plant (different smells, tastes, and effects). There is in essence, an endless amount of marijuana phenotypes beyond sativa and indica. When you examine different types of pure indicas, there are obvious differences in traits across the strains.

“A phenotype is simply a difference in the outward, physical appearance of the plant.”

What this means is that two different seeds from the same mother plant (same genotype) can have significant variation in the resulting plants (phenotype). This is thought to occur in some hybrid plants because the sativa gene is recessive. A plant with a 60/40 cross in favor of sativa can produce seeds with a dominance of indica traits, essentially resulting in two completely different strains. Although people modestly classify them as “hybrids,” we believe these phenotypes are far more complex than that, and deserve more accurate categorization in the future.

Seedfinder lists OG Kush as indica, with a family tree stemming from Chemdawg (Chemdawg x [Lemon Thai x Old World Paki Kush]). However, a number of debaters argue that OG Kush is simply a phenotype of Chemdawg that is a result of years of stabilization and finding the perfect fertilizers.

Kailua Kid from the Sierra Seed Company believes that in the latter part of 1993, a grower in northern California got his hands on the famous Chemdawg strain. He goes on to say (summarized from Seedfinder), that this was shared with a fellow grower from Sunset Beach who claimed he had a male that was the, “secret ingredient” for breeding. The male was a cross of Lemon Thai and an Old World Paki Kush (possibly where the ‘Kush’ came from), and was an ideal mix for the Chemdawg. The buds became wildly popular in Los Angeles by 1995.

“From that point on the name Ocean Grown Kush caught on and was shortened to OG Kush over time.”

The urban myth is that the original grower of the new strain was handed a bowl when his friend mentioned that the Kush he was about to smoke was “so good because it was mountain grown.” Upon further inspection, the grower detected the recognizable scent of his own crop and corrected the man by saying, “This Kush isn’t mountain grown, its Ocean Grown Kush, Bro!” From that point on the name Ocean Grown Kush caught on and was shortened to OG Kush over time.

Then, when the original grower fled the country in 1996, he left cuts of his OG with some friends in Downey, California. These phenotypes were eventually spread to San Fernando Valley and Orange County, and later became known as SFV OG and Larry OG. SFV is similar to the original phenotype, but is known to possess more sativa attributes. Larry is thought to be a phenotype of SFV and the original OG Kush. The same group of growers is rumored to be the forefathers of the original version of West Coast Dog and the original Bubba Kush.

We also came across a number of other theories about the origins of OG Kush and the meaning of ‘OG’ in our research on the subject.

The specific genetics of OG Kush will most likely forever remain a mystery, and honestly this is all right with us. The mysterious reputation makes it even more desirable; like a forbidden fruit. However, regardless of its origins, OG Kush will always be an American favorite.

Where do you think OG Kush really comes from?