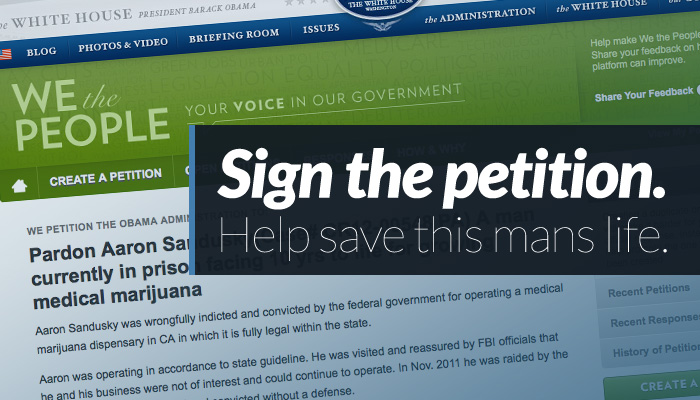 We urge you to please take the 1 minute it takes to sign this petition. The outcome of this case will have a huge impact on the future of medical marijuana and other dispensary owners.

Rancho Cucamonga (CA) resident, Aaron Sandusky, was sentenced to ten-years (10) in federal prison for operating three dispensaries known as G3 Holistic. Sandusky’s three dispensaries served nearly 17,000 patients, and were operating under compliance with California state law. His dispensaries were all visited by FBI officials, who reassured him that he and his businesses were safe, and of no interest to the federal government. Later in October, the U.S. Attorney’s office sent Aaron Sandusky letters warning him that his stores violated federal law. Sandusky decided to close two of his stores so that he could take some heat off himself.

However, contradictory to what he had been told by the FBI, Sandusky’s remaining store was raided by federal agents in November 2011. The U.S. Attorney’s Office claimed that G3 Holistic was manipulating the system and exploiting medical marijuana for personal gains. They accused Sandusky of exploiting large profits, and growing at least 1,000 plants.

Aaron Sandusky was charged and convicted of two felonies related to the production and distribution of marijuana. He was charged without a defense because he admitted to growing and selling marijuana for medicinal purposes.

Judge Percy Anderson presided over Sandusky’s case, and stated, “I’m going to take a stand for the rule of law, is what I’m going to do in this case.” The judge believes that Sandusky had “lost his way about what is right and wrong — his moral compass.” He charged Sandusky with what he said was the minimum sentence (10 years) that he had to uphold.

It’s typical for the government to allow a final statement in which the defendant can apologize or show remorse for their actions in front of the court. While Sandusky expresses no remorse for what he has done, he did apologize to those who were victimized by the federal government as a result of his case. Aaron believes strongly, as do many others, that medical marijuana is a State-wide issue that should be left to the Government of the California. He is prepared to continue fighting, even if it takes going to jail for the next 10 years to prove his point.

“This is a Constitutional battle, and we’re going to defend our rights.” – Aaron Sandusky

It is unfortunate that the Justice Department continues to emasculate campaign pledges made by the president, which assured a federal shift in focus away from state compliant medical marijuana programs. This case is nothing more than a hopeless misuse of federal resources, and unwarranted scare tactics.

Although valiant dispensary owners may well improve the situation, the responsibility largely falls upon the federal government, and President Barack Obama to stop sitting by and letting this happen.

There is a petition on Whitehouse.gov to request a presidential pardon; the petition still needs about 18,000 signatures beforeJanuary 16th to meet its 25,000-signature (necessary) goal. The petition can be found here and will only take a few minutes of your time. The tradeoff could mean saving years of Aaron Sandusky’s life, as well as setting a precedent for future cases dealing with medical marijuana and dispensary owners. With Medical Jane’s following of almost 80,000 on Facebook and 20,000 on Twitter, we should easily be able to meet that target if people will take the time to sign the petition and make their voice heard.

We urge you to please take the 1 minute it takes to sign this petition. The outcome will have a HUGE impact on the future of medical marijuana and dispensary owners. Again, the petition for Aaron Sandusky can be found here.