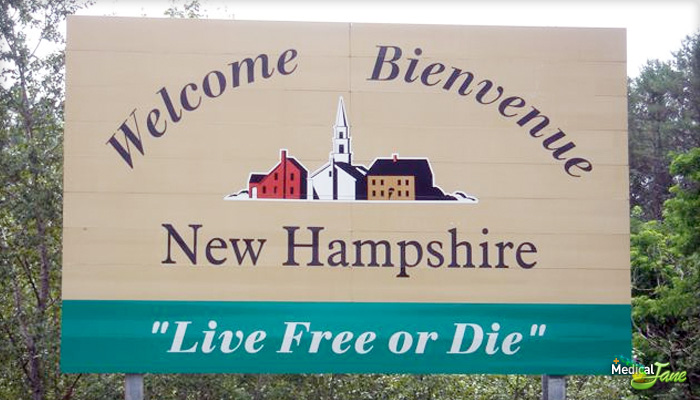 House Bill 573 was sponsored by Rep. Donna Schlachman (D-Exeter), and would create one of the more strict MMJ programs in the country. The bill would allow for up to five state-licensed dispensaries, and much to the dismay of Gov. Maggie Hassan, home cultivation would be permitted as well.

“You have to be almost dead before using medical marijuana…I would prefer a person be able to use marijuana as part of their treatment.”– Rep. Richard Meaney

Gov. Maggie Hassan has stated that she supports the legalization of medical marijuana in her state, but allowing patients or caregivers to grow their own plants may be a bit too much to swallow for the governor. Currently the proposed legislation would allow for the cultivation of up to four adult plants and twelve seedlings.

A similar bill was passed in the House and Senate last year, but it was struck down by the Governor at the time, John Lynch, who opposed medical marijuana. Now that Gov. Hassan has been elected, the odds are much higher that New Hampshire will pass the bill.

A Step In The Right Direction, But Is The Bill Too Restrictive?

Before a patient is qualified for the use of medical marijuana, they will be required to be a patient of one particular doctor for at least 90 days before he or she could obtain a recommendation. While this may end the problem of “doctor shopping” that other states have dealt with, it will also prevent many legitimate patients from obtaining timely access to the cannabis they need.

After a patient is approved, they would be permitted to possess up to six ounces of cannabis at any one time. The bill does not, however, protect patients from federal prosecution or DUI charges. In addition, the program would be restricted to serving New Hampshire residents only. Visitors who qualify in other states with MMJ programs will not be permitted to purchase cannabis while on their trip.

“[The] legislative support provides great relief to many seriously ill patients and their families, who have been waiting years for medical marijuana to become legal in New Hampshire.” – Matt Simon, MPP

Many committee members were unsure that the overly restrictive nature of the bill is the right thing for New Hampshire. “You have to be almost dead before using medical marijuana,” stated Rep. Richard Meaney (R-Goffstown). “I would prefer a person be able to use marijuana as part of their treatment,” he added.

On the other hand, many are pleased with the mere support for such a bill in the state. Matt Simon, a legislative analyst for Marijuana Policy Project, commented after the committee hearing, “[The] legislative support provides great relief to many seriously ill patients and their families, who have been waiting years for medical marijuana to become legal in New Hampshire…Patients whose doctors recommend they use marijuana to treat their conditions should not have to live in fear of arrest in the ‘Live Free or Die’ state.”

House Bill 573 will now be sent to the full New Hampshire House for consideration.