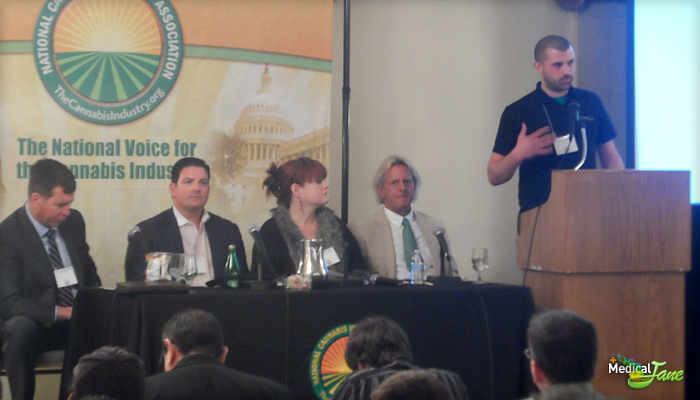 At the recently held Northeastern Cannabusiness Symposium in Boston, an extensive range of players from the medical marijuana industry spoke to an audience of journalists and hopeful entrepreneurs about the nature of “canna-business.”

While yesterday’s article was focused around the inherent uncertainties of the medical marijuana industry, today we will discuss the benefits of entering this budding industry (no pun intended), as well as provide some examples of existing businesses that are thriving outside of dispensaries.

“Fortune Sides With Him Who Dares”

Although most businesses fail, statistics are in fact on the side of business owners in the marijuana industry. The Marijuana Business Factbook (MBF) estimates that from 2013 to 2018, national medical marijuana profits will rise from $1.3-1.5 billion to $4.5-6.0 billion annually. The MBF’s study on dispensaries already in operation revealed an overwhelming majority (84%) made $100,000 or more in annual revenue. Twenty-seven percent made more than a million dollars yearly, while only fifteen percent made less than $100,000.

The important thing to remember about these numbers is that a lot of dispensary or collective owners are not in this for the money. Many collectives are nonprofit organizations and only reinvest excess revenue in providing additional services for members, or they donate to local advocacy groups; they do not work to generate profits for owners. This is despite the fact that medical cannabis collectives organized as nonprofits are still required to report and pay taxes like a traditional C-Corporation. This is because the Internal Revenue Service will not recognize providing medical cannabis as a tax-exempt activity.

Dispensaries Are Not The Only Businesses Profiting From MMJ

Although dispensaries are profitable, they are not the only businesses cashing in from medical marijuana. For some, the risk is too great and they are afraid of working on the front line so to speak. The good news is that there are plenty of other opportunities outside of the traditional dispensary. Generally speaking, there are four areas of business outside of dispensaries that people could profit in: cultivation operations, infused product manufacturers, retail (ex. smoke shops), and any ancillary businesses that deal with the inner workings of the formerly mentioned areas (Electricians, Plumbers, etc.).

Ancillary businesses that adapt and innovate with the changing times can make a huge profit from medical marijuana. One of the best examples of this comes from Jessica Billingsley, a young and successful University of Georgia graduate who co-founded a software company and is developing a service called MJ Freeway. Billingsley states that the company’s mission is to track every gram of medical marijuana, “from seed to sale.” She stated that, “regulation is the way forward,” in regards to medical marijuana.

Seed-to-sale tracking is only one example. Ancillary businesses can deal in anything from heating or irrigation for greenhouses, insurance, lab testing, and much more. A soil company by the name of Blue Sage Microbes provides another great example. They are the self-proclaimed first company to develop soil specifically for growing marijuana, and are making a large profit by selling their chemically perfected soil to dispensary owners directly.

Colorado’s Dixie Elixirs & Edibles was formed in 2009, and specializes in marijuana infused edibles, drinks, and tinctures. Managing Director Tripp Keber represented the company at the symposium, and stated, “Focus on wellness, not intoxication,” to be successful in the medical marijuana industry. Proper testing and labeling is of the utmost importance to Dixie Elixirs. This allows patients to know exactly what to expect when they ingest an edible or drink.

Be Part Of The Revolution

This last benefit might be interpreted as some to be an empty bag of optimism, but they need to take a dab and chill out. Even the major proponents who spoke at the symposium couldn’t help from occasionally delving into this area of philosophy. To be a part of what is more than likely to be the end of the federal government’s prohibition of marijuana would be something to be incredibly proud of. Now that a large number of states have legalized medical marijuana, and Colorado and Washington have legalized recreational use of marijuana, the dominoes have started to tumble in that direction that seemed at the very least to be unrealistic even just a decade ago.