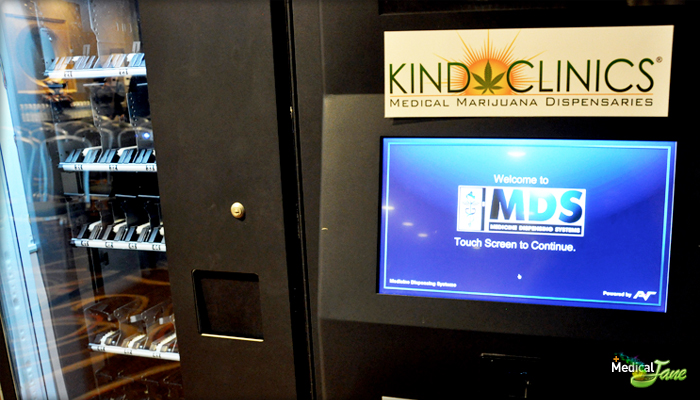 During a recent seminar at the Sheraton Hotel in Boston, CEO of Kind Clinics Dr. Bruce Bedrick gave a presentation to a room of eager and hopeful Massachusetts-based entrepreneurs about the future of the medical marijuana industry in the Bay State.

Specifically, Dr. Bedrick was there to allure investors to partner with him to increase their chances of obtaining one of the 35 available dispensary licenses that will be allowed by the Massachusetts government.

The heavily regulated nature of Massachusetts’ policy has presented Dr. Bedrick with a prime opportunity and market to tout Medbox Inc., a company based in Arizona which designed and built the first “armored, automated, bio-metrically controlled dispensing and storage system for medicine and merchandise – for safe, legal, and accountable dispensing of medical marijuana.”

Dr. Bedrick was insistent throughout his speaking that getting one of the highly coveted licenses would be no easy feat, and he cited specific regulations within the Massachusetts code as proof. Not only would potential dispensary owners need to send in a request to receive a dispensary license application, but a new special government committee will be dealing exclusively with approving or denying these applications. This committee will grade each application with extreme prejudice on a system that takes into account the business model, security measures, and requires implementation of a “seed-to-sale” tracking system for every plant grown.

“It is required that every dispensary grow its own supply, and they want evidence that the investor has at least $500,000 dollars in an account to start business.”

The state has not presented an opportunity right out of the gate for small-minded entrepreneurs to get into the medical marijuana game. It is required that every dispensary grows its own supply, and they want evidence that the investor has at least $500,000 dollars in an account to start business. An additional rule that raised many skeptical eyebrows in the room was the provision that required dispensaries to be operational within 120 days of being approved by the state. Dr. Bedrick concurred with the concerns raised by the audience, saying, “120 days isn’t enough time to get everything built up and permitted, let alone grow…[the rule] needs to change.”

Medbox dispensary machines are specially designed to be acceptable for use in dispensaries even under the most scrutinized of medical marijuana policies, including the most recent measures passed for Massachusetts. The machines include a combination of the physical dispensary system and a sophisticated computer touch-screen database that logs every transaction made and creates an “unalterable record.” While they operate similarly to one, Dr. Bedrick stressed that the technology is, “…not a vending a machine. This is a tool to be used by dispensary staff.”

How Does A Medbox Work Exactly?

The machine is designed to prevent any unregulated or illegal sale of medical marijuana. First, a medical marijuana patient would have to scan their fingerprint on the machine’s scanner, and then provide one additional form of I.D. (such as a license or passport).

Next, the patient would swipe their state licensed medical card to prove that they have a valid subscription from a physician, and for what amount of medical marijuana they are prescribed. The card would also store electronic funds that can be used to purchase the contents within the machine. Each patient would have an assigned limit on the amount of medicine they can purchase at a time, and if the patient tries to buy more than their limit, or they have insufficient funds, the transaction will be cancelled.

Dr. Bedrick claims that for marijuana to be taken seriously as a medicine and an industry, it has to be provided and dispensed in a professional, clinical, and tightly regulated way. To aid this endeavor, Medbox teamed up with a software company called BioTrackTHC that provides the “seed-to-sale” service of tracking medical marijuana that has been mandated by the state government of Massachusetts.

What Is BioTrackTHC & “Seed-to-Sale” Tracking?

BioTrack technology enables dispensary owners to create a virtual floor plan of their grow room, and the program logs absolutely everything involved with the cultivation process, including the current state of growth and condition of every plant as well as the wet and dry weights of a chosen amount of marijuana.

“If there was one thing that was made clear during the presentation, it was that the regulation of medical marijuana in Massachusetts will be the strictest and most extensive thus far in the country.”

Anything considered waste, such as stems, are also logged into the comprehensive database that can be accessed at any time to ensure that inspections go smoothly. BioTrack enables growers to print barcodes for every plant, an essential feature for tracking.

About 300 people attended Dr. Bedrick’s seminar, at which he insisted that: “My job is to set you up for success.” However, if there was one thing that was made clear during the presentation, it was that the regulation of medical marijuana in Massachusetts will be the strictest and most extensive thus far in the country, and investors will be taking a big risk if they want to sit at the exclusive table of state-licensed dispensary owners. Not to mention it is completely ridiculous to me to require an individual to have at least $500,000 cash in an account before applying — that seems unconstitutional to me. After all, how can we expect patients to get the medicine they need if the requirements are too strict for business owners and caregivers to open up shop?

It sure looks like the perfect scheme to keep the money in the hands of those with big pockets… but what do I know? I guess I am just bitter I don’t have $500,000 sitting in an account somewhere…