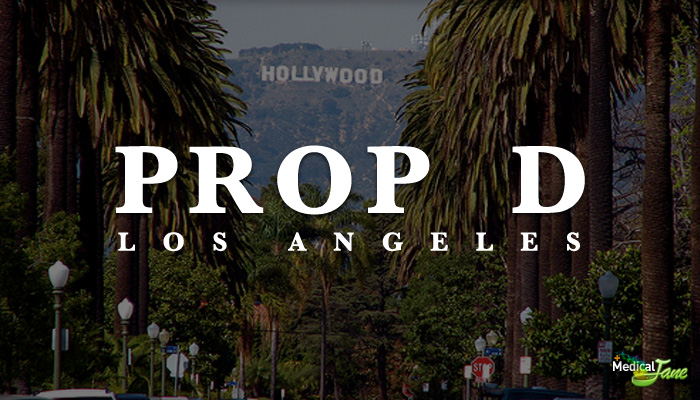 On Tuesday, Los Angeles voters passed Proposition D, an ordinance that will close hundreds of dispensaries and raise the taxes on those that will remain open.

Nearly 63% of Los Angeles voters casted their vote in favor of Proposition D on Tuesday’s mayoral election ballot, while only 37% opposed. The proposition will limit the number of medical dispensaries to the ~135 who opened prior to 2007, a sharp decline from the 1000+ that are currently serving qualified patients.

“We’ve had a great amount of difficulty over the past few years on how to come up with a consensus for handling medical marijuana. This is the perfect solution.”– Paul Koretz

The new proposition will require background checks of all managers and will raise gross receipt taxes from $50 to $60 per $1000 of sales. Remaining dispensaries must keep a certain distance from schools, parks, residential neighborhoods and other dispensaries. They will be required to close between the hours of 8 p.m. and 10 a.m., and the consumption of cannabis onsite will be prohibited.

The proposition was backed by several members of the City Council (including Bill Rosendahl), the Greater Los Angeles Collective Association (GLACA), the United Food and Commercial Workers Union (UFCW), the city attorney and both mayoral candidates.

“We’ve had a great amount of difficulty over the past few years on how to come up with a consensus for handling medical marijuana. This is the perfect solution,” said Los Angeles City Councilman Paul Koretz, who pushed to get Proposition D on Tuesday’s ballot.

The approved regulations do not provide a way for a new collective to open if one of the original 135 closes. David Welch, the attorney that spearheaded Proposition F, said he intends to file a lawsuit challenging Proposition D on behalf of the dispensaries that are not protected by the new measure.

What Will This Mean For California?

Since voters approved Proposition 215 in 1996, legalizing medical marijuana in California, the medical marijuana program has been made up of a patchwork of legislation. Local authorities have struggled to keep up with the regulation and are in need of some state level oversight.

Thankfully, the California Senate voted 22-12 on Monday to pass Senate Bill 439, which would take the first steps towards implementing a state-wide regulation of the sale of medical marijuana. This is along with Assembly Bill 473, which was introduced to the Assembly Appropriations Committee by Assemblyman Tom Ammiano.

Hopefully we will see some stability brought to the California medical marijuana program in the coming months. It would be a shame to see localities banning dispensaries and restricting safe access to qualified patients because they are overwhelmed and under resourced. It’s time for the state to step up and take responsibility.