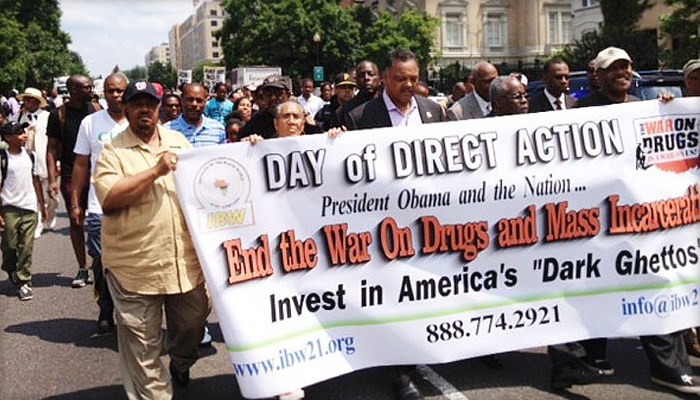 A ‘Day of Direct Action’ In The Nation’s Capital

The Institute of the Black World 21st Century’s “Day of Direct Action” rallied in Washington Monday in protest of the Obama administration and the war on drugs.

On Monday, Rev. Jesse Jackson took the stage in front of a reported crowd of 500 at a rally that called on President Obama to take “direct action” and act on the following agenda:

The rally protesting the “war on drugs” took place on the 42nd anniversary of the war on drugs, which the group claims is a racially biased policy/strategy, the “New Jim Crow,” which has disrupted and devastated Black communities across the country.

“As i have said so many times, the War on Drugs, policing, criminalization and mass incarceration have become substitutes for social, economic and racial justice in America’s dark ghettos. The damages to our community have been devastating…and it must end,” said Dr. Ron Daniels, president of the Institute of the Black World.

Dr. Daniels may be on to something according to a study that was published earlier this month by the American Civil Liberties Union. The study, based on the law enforcement data from 50 states including the District of Columbia, revealed that African-Americans are nearly four times as likely to be arrested for marijuana possession as whites. In some states such as Iowa, Minnesota and Illinois, the situation is far worse and blacks are about eight times as likely to be arrested.

“The war on marijuana has disproportionately been a war on people of color,” said the director of the ACLU Criminal Law Reform Project, Ezekiel Edwards. “State and local governments have aggressively enforced marijuana laws selectively against Black people and communities, needlessly ensnaring hundreds of thousands of people in the criminal justice system at tremendous human and financial cost,” he said in a statement.

Despite a majority of Americans supporting the full legalization of cannabis, states spent an estimated $3.6 billion enforcing marijuana possession laws in 2010 alone. New York and California alone spent over a combined $1 billion.