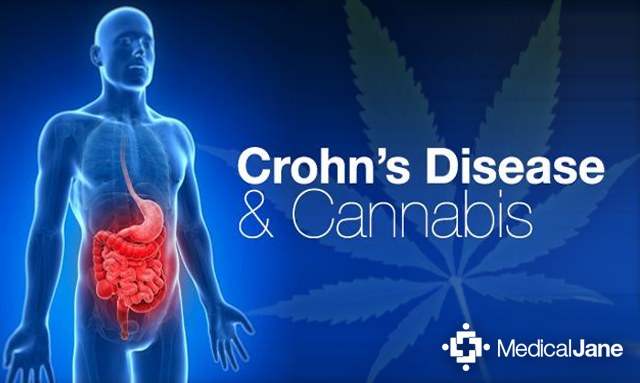 A recent study conducted by Meir Medical Center and Sackler Faculty of Medicine provides evidence that cannabis can help relieve symptoms of inflammatory bowel disease (IBD). This phenomenon has been suggested in the past, but this was the first controlled clinical trial conducted to test it. In particular, the study focused on the treatment of Crohn’s disease.

Crohn’s disease is type of inflammatory bowel disease that can affect the gastrointestinal tract. It can cause various symptoms which alter normal digestion. Some of the most common symptoms include: abdominal pain, weight loss, vomiting, and diarrhea (may be bloody if inflammation is bad enough). It also can cause symptoms like: fatigue, arthritis, and a lack of concentration.

Crohn’s disease is a chronic illness, meaning there is no cure. The age of onset is usually around 20-years-old and it is the result of the environment interacting with genetics. Symptoms are usually a sign that the autoimmune system is attacking the gastrointestinal tract. This often happens in response to diet and stress. Therefore, a person may be vulnerable to acquiring Crohn’s disease, but never experience symptoms if they maintain a healthy lifestyle.

Since there is no cure for Crohn’s disease (even with surgery), treatment is more focused on forcing the disease into remission and reducing symptoms for the patient. Typically this is achieved through the use of steroids and suppression of immune system. Since these treatments aren’t the safest options, recent research has focused on alternative treatments. Acupuncture has had success, as well as a recent Israeli study that investigated the usefulness of cannabis.

Twenty-one (21) patients were split into two groups; they were asked to report their symptoms through 8 weeks of treatment and 2 weeks after. One group was given two daily joints with 11.5 mg of Tetrahydrocannabinol (THC) and the other smoked cannabis flowers in which the THC was already extracted (placebo).

The study’s data stated that the group administered THC showed signs of significant improvement in their symptoms. Five out of the eleven patients (45%) reached complete remission of their Crohn’s disease, when steroids and immune system depressors had been unsuccessful. Only 1 out of 10 achieved remission in the placebo group (10%).

“Five out of the eleven patients (45%) reached complete remission of their Crohn’s disease, when steroids and immune system depressors had been unsuccessful.”

Ten out of eleven (91%) patients in the Cannabis group improved their score on the Crohn’s disease Activity Index by 100 points or better during treatment.

The better scores demonstrate an improvement in the symptoms of Crohn’s disease. The same was only achieved by 4 of the 10 patients (40%) in the placebo group.

The study showed cannabis to have other uses in addition to the benefits it had on the symptoms of Crohn’s disease. 3 of the 11 patients (27%) in the cannabis group were weaned from their steroid dependency. This supports recent findings that Cannabis can relieve Opiate withdrawal symptoms. Additionally, THC caused an improvement in sleep and appetite (see Appetite & Cannabinoids) in the cannabis group.

Smoking cigarettes has been proven to cause an increase in Crohn’s disease symptoms. That being said, it says something about cannabis to see this study being conducted by smoking cannabis instead of vaporizing it.

Even while ingesting cannabis through the most archaic means possible, its medicinal properties shined through. The smoked THC seemed to cause a significant improvement in the symptoms of Crohn’s disease, while being safer than steroids for long-term use.

Regardless, more studies on effects of cannabis on Crohn’s are necessary before a true conclusion is made. Ideally, additional studies will be performed using much larger sample sizes and vaporized or ingested cannabis rather than smoked cannabis.