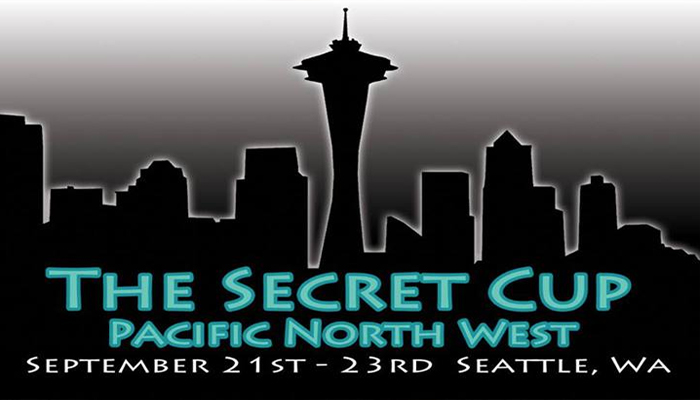 The Secret Cup Pacific Northwest Regionals Are This Week

What Is The Secret Cup?

Despite the founders’ best efforts to keep it quiet, the first Secret Cup, last year in Denver, received a lot of public interest the moment they set a definitive date and location. Its early success led to more Secret Cups sprouting up in other legal states, and they were equally successful in Los Angeles and Seattle for good reason.

“Many believe the Secret Cup is the best way to determine superior hash makers.”

The Secret Cup prides itself on being a competition made by hash makers, for hash makers. The contest happens in an undisclosed location and is not open to the general public. What sets it apart is that the competitors are the judges. 30 hash makers submit their concentrate (Shatter, Budder, solventless, etc.) and vote without ever knowing who made what.

The Secret Cup idea started in San Jose when a group of extract artists wanted to create a competition with low entry fees, blind testing and peer judging. Also, they decided to rank the top 15 samples, as opposed to only the top 3. The Secret Cup’s format leveled the playing field and gave up-and-coming hash makers a chance to showcase their skills. Many believe it is the best way to crown superior hash makers.

Following the popularity of the early Secret Cups, the founders have managed to make some improvements. Instead of a number of individual competitions, there will be a tournament-like format to determine a nationwide winner. First, there will be 5 regional competitions, and the top 3 competitors from each area will be invited to the Secret Cup Finals in Denver at the end of the year.

“Secret Cup tickets are being sold for 3 regional competitions: The Pacific Northwest, Northern California, and Denver.”

As of now, Secret Cup tickets are being sold for 3 regional competitions: The Pacific Northwest, Northern California, and Denver. Although each regional will vary slightly, they’ll have the same format for the most part. Those with VIP tickets ($250) will be invited to a catered dinner and party the night before the competition. Not only is this a great opportunity to meet the hash makers, but you’ll be able to taste their entries too.

Although the Secret Cup competition itself is not open to the public, there is a party/expo in which the awards are announced that anyone may attend. Another perk of the VIP tickets is that they give access to VIP areas during the party as well. The general admission price for the expo is $35, but tickets are currently available for pre-sale at $25.

According to their Facebook page, The Secret Cup Pacific Northwest Regionals will be this weekend in Seattle. The event will be hosted by Task Rok, the owner of Highly Educated Ti, and Daniel de Sailles of Top Shelf Extracts. The competition’s location won’t be released until Thursday, when VIP ticketholders will be sent an email with all the necessary details.

Unlike the competition, the award party is no secret. It is set to take place at 7 Point Studios on Saturday. The festivities are set to begin at 12:00PM and last until 2AM MDT. It will feature music from DJ Triple Crown, Ryan-I, and DJ Juggy. Further, there will be a live musical performance by Ra Scion.

Not only will the top 3 entries receive an invitation to Denver’s final Secret Cup in December, but they will receive a custom-made glass piece from Ewok Glasstoo. The elaborate trophies serve as another bit of evidence that the Secret Cup has spared no expense in making a premier competition for hash makers. The contest’s new format will help push the limits of US hash making.