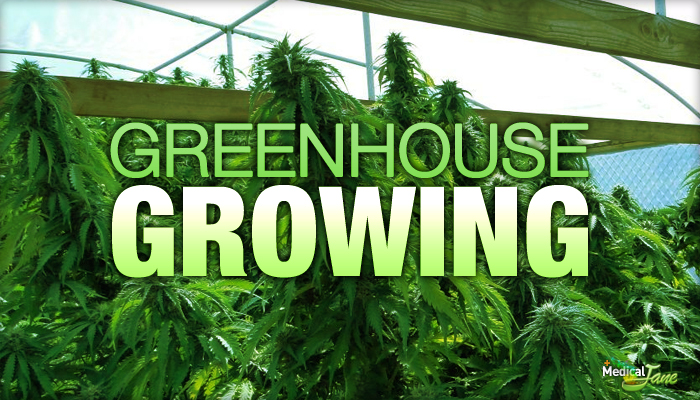 Growing plants in a greenhouse is a tried and tested method that has been around for centuries. In fact, 13th century Italian explorers used glass greenhouses, called botanical gardens,to house the tropical plants that they brought back from their world travels.

“A greenhouse is one of the best places to grow medicinal marijuana.”— Jorge Cervantes

Expanding on the Italians’ design, French botanist Charles Lucien Bonaparte is credited with designing the first modern greenhouse in Holland during the 1800s. The new design, and the improvements that followed, led to greenhouses being commonly used to grow plants on a commercial scale.

Greenhouses allow cultivators to limit production costs and benefit the environment by cutting down the carbon footprint of a large-scale grow operation. Because of this, greenhouses have taken hold in the cannabis industry. As cultivation expert Jorge Cervantes put it, “a greenhouse is one of the best places to grow medicinal marijuana.”

Basics Of Growing Medical Marijuana In A Greenhouse

Greenhouse growing combines the best part of a typical outdoor grow, natural sunlight, with the control of growing indoors. They are structures with a covering (usually glass or specialized plastic) that allows light through. Depending on the design, greenhouse cultivators are able to control important variables, such as: temperature, humidity, soil, air circulation and light.

In terms of the design, there are 3 main types of greenhouses. The first, attached greenhouses, are connected to another structure. Because of their simplicity, these greenhouses cut down on design and material costs. The downfall of attached greenhouses, however is that they are limited by nature. They can only be placed where another building already exists.

Connected Greenhouses are another example of a freestanding design, but geared towards large-scale production. Essentially, they are multiple greenhouses that are joined together. The large, undivided space allows for more efficient heating and cooling throughout the facility, but there are usually different sections to house and tend to seedlings, clones, and plants in different stages of growth.

What Are Some Advantages Of Greenhouse Growing?

An obvious advantage of greenhouse growing, over indoor, is the use of natural sunlight. As we know, nothing beats the power of the sun. Greenhouses allow light through the roof, but keep the thermal energy it produces from escaping. This “greenhouse effect” helps maintain a stable temperature, as fluctuations can stress the plants and stunt growth.

Though cannabis plants like warm weather, it’s important not to let them get too hot. Because of this, many greenhouses are equipped with ventilation systems. Using intake fans and exhaust vents to combat excess heat, cultivators can maintain ideal greenhouse temperatures (typically between 70 and 80 degrees).

“Many large-scale greenhouses are equipped with supplemental lighting fixtures, which allow the facility to be used more throughout the year.”

In addition to temperature, the airtight covering on greenhouses can contribute to humidity, and have great benefits on plant growth. Low humidity levels can cause valuable water, which is needed during photosynthesis, to evaporate more rapidly. Too much humidity can cause poor growth and even fungal disease. Ideally, relative humidity should be around 60% for optimum growth.

One of the best advantages of greenhouse growing, over outdoor, is the ability to manipulate lighting. Many large-scale greenhouses are equipped with supplemental lighting fixtures, which allow the facility to be used more throughout the year. As we know, seedlings and plants in the vegetative growth stage require longer periods of light; additional lights make it possible to grow in the winter, when days are short.

Conversely, greenhouse growers can use a technique called light deprivation to reduce the amount of time plants are exposed to light. Many people use the technique to harvest earlier in the year (traditional harvest time is mid-fall). With light deprivation, growers can force plants to start flowering during the summer when the sun is out for more than 12 hours each day.

Another major benefit of greenhouse growing is that it greatly reduces the amount of power used, in comparison to an indoor facility. The need for more “green” growing practices continues to increase as medical marijuana becomes more prevalent across the nation. According to Scott Reach, founder of the seed company Rare Dankness, “greenhouses are the future of growing.”

While speaking at Danny Danko’s Cultivation panel at the Seattle Cannabis Cup, Scott commented on the widespread implementation of greenhouse growing techniques. According to him, there have been nine 40,000-square-feet greenhouses built in Colorado within the past year and a half. To compare, a football field is 48,000-square-feet without the end zones.

The increased popularity of commercial greenhouses makes sense logically. 24-feet-high ceilings eliminate the size restrictions that indoor growers are familiar with, and greenhouses “can offset a $15,000-$20,000 electricity bill”, according to Scott.

These savings certainly should trickle down to medical marijuana patients, and already has. During the cultivation panel, Scott recalled that the going price for quality cannabis in Colorado was $350/ounce before medical marijuana. Now Colorado patients can find an ounce for $250. Without a doubt, the increased number of greenhouses will continue to make medical marijuana more affordable for patients in the “Centennial State,” and beyond.