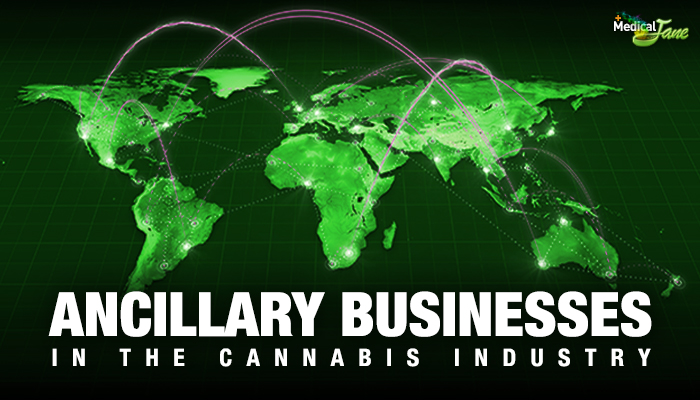 The Cannabis Industry And The Boom of Ancillary Businesses

by Zach Reichard on October 21, 2013
ShareTweet

Ancillary businesses provide inventors, entrepreneurs, and investors with a legal window to capitalize on the booming cannabis industry.

You may not be aware, but there were more fortunes made by merchants than by miners during the California Gold Rush. In fact, even the man – John Sutter – who discovered the first two gold nuggets on his California property died a broke man.

Although you may not have heard of Sutter, the names ‘Strauss’, ‘Wells’ & ‘Fargo’ might ring a bell. After the initial boom, nearly one in 90 people in the United States were living in California. Many businessmen recognized there was more money to be made selling the dream, per se, than actually digging for gold.

Another notable businessman that capitalized on the boom was German-born tailor, Levi Strauss. The tailor arrived in San Francisco with plans to open a store that would sell wagon covers to miners.

However, Levi quickly recognized an opportunity to provide miners with sturdy work pants that would withstand the long arduous days in the mines. I think we all know how that turned out…

How Much Is A Legalized Cannabis Industry Worth?

Many people liken the blooming of the cannabis industry to the California Gold Rush; it has even been referred to as “The Green Rush”. However, with last year’s legalization in Colorado & Washington – and proposed legalization in several more states like Massachusetts – it’s no wonder we’re hearing these metaphors.

According to Economist.com, a fully legalized cannabis industry could be worth more than $100 billion. According to Medical Marijuana Business Daily, commercial medical marijuana sales are estimated at $1.5 billion per year, and are projected to increase to $3 billion in 2014 & $6 billion in 2016.

With that being said, if the California Gold Rush taught us anything, it’s that a substantial portion of this large fortune will go to businessmen starting and investing in ancillary businesses.

Launching An Ancillary Business In The Cannabis Industry

Ancillary companies don’t get involved in the actual growing or selling of the cannabis, but rather assist or provide services to those that do.

These companies also include those that provide products or services geared towards patients and cannabis users. Some examples include security companies, consultants, insurance providers, accountants, real estate professionals, vaporizer companies, and glassblowers.

According to the Marijuana Business Factbook 2013, 80% of ancillary canna-business owners feel that they will see ‘moderate’ to ‘big’ growth in 2014, 18% believe they will stay about the same, and only 3% think they might go under.

At any rate, this doesn’t mean that anyone who considers him or herself a ‘Macgyver Smoker’ can easily jump in the business just because they can make a bong out of an avocado, an ice pick, and a snorkel (“Trust me bro, I’ve made bongs with less!”).

In an article published on Economist.com, a senior investor in The ArcView Group, which connects investors with promising canna-businesses, recalls a “charming but hopeless presentation by two stoner entrepreneurs” that invented a device to convert Starbucks coffee cups into water pipes. He fears that innovations such as these would be less entertaining & have no room in the industry as Wall Street takes on a larger roll.

That hasn’t stopped Matt Luxton, the owner of Royght!, who has already raised $140,000 for his company and is seeking an additional $80,000 to launch his product, the “Halo”. This just goes to show that while a product may not be for some people, it will always strike a chord with a certain demographic.

Ways To Bring Your Ancillary Cannabis Product To Market

We recently got a chance to chat with Matt LaPrairie, the Co-founder & CEO of 420 Science – the creators of 420 Jars, the 420 Scope, Smoke Soap, RezBlock & more – to get his take on the evolving industry and its effects on ancillary businesses.

When we asked Matt for his advice on how to bring an ancillary cannabis product to market, he told us the first step is to validate your idea. “The very first step is to make sure this brilliant idea of yours is actually worth pursuing,” he said.

“Talk to your friends who smoke, employees at head shops, and anyone else with a connection to the industry. Are they willing to spend money for your product? If so, COLLECT THEIR MONEY! Seriously, ask for money on the spot. You are now taking pre-orders,” said LaPrairie.

“The very first step is to make sure this brilliant idea of yours is actually worth pursuing.” – Matt LaPrairie, 420 Science

Another way to validate your idea is to seek investment. Companies such as ArcView & Privateer Holdings– a private equity firm who recently raised $7 million in a Series A round to invest in cannabis companies – are becoming more prevalent, providing low-budget entrepreneurs funding to get their business up and running.

Still, despite the growing revenue stream and national acceptance, many investors are hesitant to associate their brand with the taboo “drug”. On the contrary, more risky investors such as Justin Hartfield – cofounder and CEO of WeedMaps and a general partner at Emerald Ocean Capital – told FastCompany that the recent announcement by the Justice Department “gives entrepreneurs a “greenish” light to perhaps start touching the plant.”

“Being in ancillary business is hard because you’re always one step removed. There are some real possibilities in the future,” concluded Hartfield.