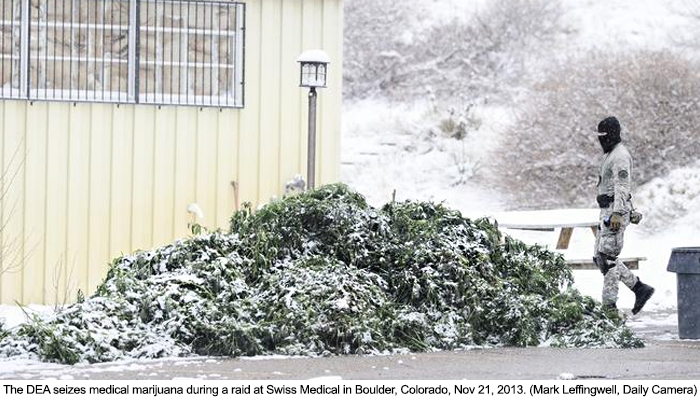 Federal agents executed multiple search and seizure warrants at medical cannabis facilities in Colorado Thursday morning. The raids occurred at dispensaries and cultivation facilities in the Denver and Boulder areas.

“We hope they are sticking to their word and not interfering with any state-regulated, law-abiding businesses.”– Mason Tvert

In his written statement, Dorschner went on to explain what he considers to be an important note. “Although we cannot at this time discuss the substance of this pending investigation, the operation under way today comports with the Department’s recent guidance regarding marijuana enforcement matters,” he wrote.

In August, the Department of Justice released a memo intended to reduce confusion about their plans to enforce federal cannabis policy. The majority of the memo mirrored past DOJ statements, but it outlined 8 federal priorities with regard to cannabis enforcement. They are as follows:

Mason Tvert, Communications Director of the Marijuana Policy Project, made a statement noting that he does not know what inspired the raids.

“The Justice Department said it would respect states’ rights to regulate marijuana, and that it would not go after businesses as long as they are complying with state laws,” he explained. “We hope they are sticking to their word and not interfering with any state-regulated, law-abiding businesses.”

Reports from the Denver Post, The Daily Camera, and Westword suggest that VIP Cannabis in Denver, Swiss Medical in Boulder, and marQaha were each among the businesses raided Thursday morning. It is expected that more raids are to come throughout the day.