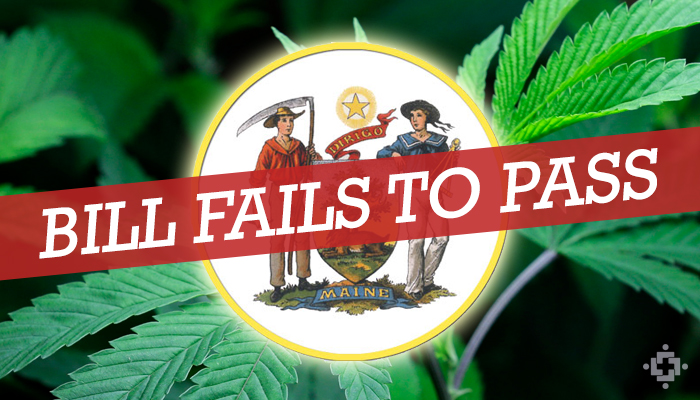 With a 5-5 vote on Thursday, the Maine Legislative Council failed to pass LR 2329 – “An Act to Align Maine’s Marijuana Laws With the Guidelines Governing Taxation and Regulation Issued by the Federal Government.” In turn, the measure will not be introduced for a full Senate vote during this legislative session.

“Senate President Justin Alfond (D-Portland) was among the lawmakers to vote “No” on the measure.”

As written, the measure would permit the cultivation of up to 6 plants, possession of up to 2 and 1/2 ounces, and use of marijuana by individuals over the age of 21. It would establish a regulated retail system to distribute cannabis, edibles, and other infused products as well.

Of course, voters in Portland, Maine overwhelmingly passed a bill legalizing the adult-use of cannabis in the city earlier this month. Nonetheless, Senate President Justin Alfond (D-Portland) was among the lawmakers to vote “No” on the measure.

LR 2329 was sponsored by Rep. Diane Russel (D-Portland), and it was her third time introducing the measure. Despite the bill’s shortcoming Thursday, it will likely be reconsidered in 2015.

Erik Altieri, Communications Director for NORML, made a statement noting his disappointment in the Maine Legislative Council for their failure to pass Rep. Russel’s marijuana legalization bill.

“The vote this morning is a disservice to the state and the residents these officials are supposed to be representing.”– Erik Altieri

“This issue isn’t just important to Rep. Russell, but to all of us who live in the state,” Altieri explained. “This legislation would have fostered an important discussion on marijuana legalization and laid out a framework for regulation that benefited the people of Maine. The vote this morning is a disservice to the state and the residents these officials are supposed to be representing.”

David Boyer, the Maine political director at the Marijuana Policy Project, expressed a similar sentiment about Alfond’s vote in particular. “To have a senator that represents a large portion of Portland not vote for the bill, where an average of 80 percent of voters supported the initiative, is kind of disheartening,” Boyer stated.