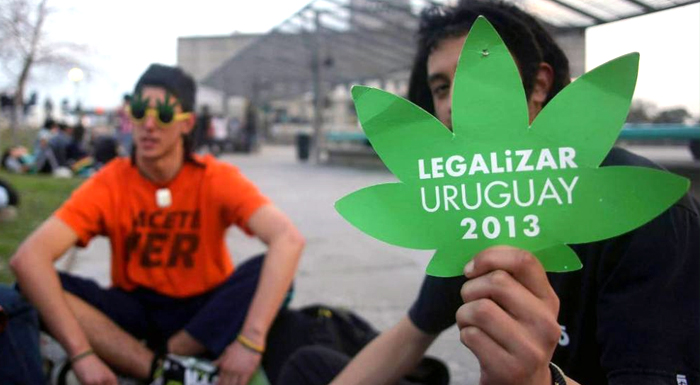 Uruguay Becomes The First Country In The World To Legalize Cannabis

URUGUAY — In a 16-13 vote Tuesday, Uruguay‘s parliament passed a bill that allows for the cultivation, sale, and adult-use of cannabis. With the measure’s passing, Uruguay becomes the first country in the world to legalize the production and sale of legal cannabis.

“Uruguayans over the age of 18 will be permitted to buy up to 40 grams of cannabis from licensed pharmacies each month.”

Under the new legislation, Uruguayans over the age of 18 will be permitted to buy up to 40 grams of cannabis from licensed pharmacies each month. With that said, they would be required to register on a database to do so.

Adult residents will also be allowed to cultivate six plants, or 480 grams (17 ounces), at any given time. Furthermore, groups of up to 45 gardeners may form “cannabis clubs” in order to grow as many as 100 plants.

Uruguay Will Regulate The Production & Sale of Cannabis

It should be noted that consuming cannabis is already legal in Uruguay. Nonetheless, the production and sale of the plant are each punishable by law.

However, the newly passed legislation allows for regulation of these aspects of the industry. As a result, there is an expected market price of $1 per gram.

At this point, authorities will have 120 days to establish a regulatory body that will regulate cannabis cultivation, retail, and consumption in Uruguay.

President Jose Mujica has announced his support for the measure in the past, explaining that it would inhibit the illegal drug trade. Echoing this belief, Senator Alberto Couriel said stated that the bill’s passing marks “a historic day” for Uruguay.