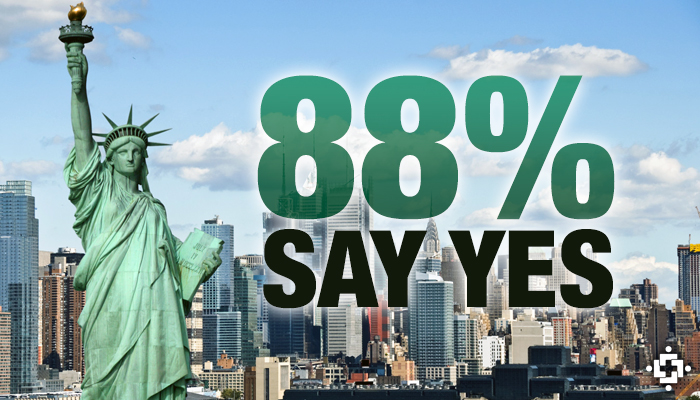 ALBANY, NY — Just over a month after Governor Andrew Cuomo announced plans to implement a limited medical marijuana program, a recent poll from Quinnipiac University reveals that such legislation would be welcomed by New York residents.

“Medical marijuana is a no-brainer for New York State voters, and they also would follow Colorado in legalizing marijuana for fun.” – Maurice Carrol

According to the poll results, an overwhelming majority (88%) of New York voters would support medical marijuana legislation in the state. This is compared to just 9% of respondents in opposition.

Furthermore, a slight majority (57%) of those surveyed said they are in favor of legalizing cannabis for adult-use like Colorado and Washington.

Medical Marijuana Is A ‘No-Brainer’ For New York Voters

Shedding light on the results is Maurice Carrol, director of the Quinnipiac University Polling Institute. “Medical marijuana is a no-brainer for New York State voters, and they also would follow Colorado in legalizing marijuana for fun,” he explains.

Investigating further, we find that a generational gap may exist as far as legalizing cannabis for adult-use is concerned. The poll reveals that 83% of people from 18-29 years old support legalization. The same can said for just 38% of senior citizens (65 and over).

“The poll reveals that 83% of people from 18-29 years old support legalization.”

Also included in the poll was a question about the perceived dangers of cannabis and alcohol, a hot topic since President Obama touched on the subject in an interview with the New Yorker last month.

The poll results show that just 13% of New York voters believe cannabis is more dangerous than alcohol. In comparison, 36% of respondents noted that cannabis is the less dangerous substance. 45% of those polled, however, believe they are equally as dangerous. The Quinnipiac Poll was conducted February 6-10. 1,488 New York State voters were questioned by live interviewers over the phone.