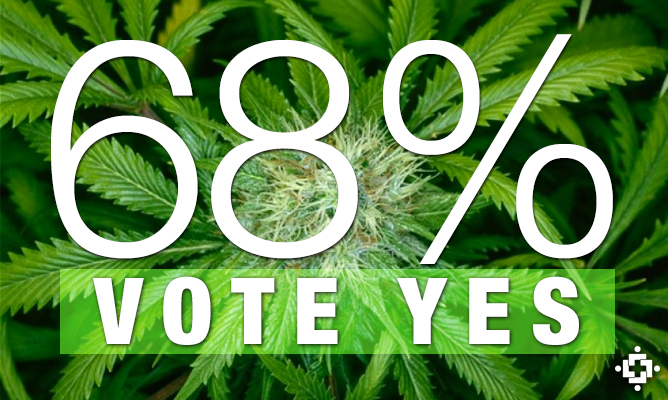 In a recent Public Policy Polling survey released by Marijuana Policy Project (MPP), over two-thirds of Delaware voters (68%) are in favor of marijuana decriminalization. They supported the replacement of criminal penalties for a civil offense that is punishable for a fine of up to $100 for those caught with possession of up to an ounce of marijuana.

In addition to this, the poll showed 51% of Delaware voters showing their support for making cannabis use legal for adults 21 and older, while taxing and regulating it like alcohol.

Delaware voters were given the Public Policy Polling survey from March 18-19. Overall, there were a total of 951 voters who participated in the survey.

In the first question, Delaware voters showed their support (64%) for Delaware’s current law allowing those with serious illnesses to be able to obtain medical marijuana for their symptoms with a physician’s approval.

“68% of Delaware voters supported the change [cannabis decriminalization], while only 26% opposed it.”

The second question mentioned the current Delaware law of possibly being fined up to $1,150 along with a sentence of up to six months in jail for small possessions of marijuana.

Voters were then asked whether or not they would support to instead making the law a civil offense with no possibility of jail time, and up to a fine of $100.

An overwhelming 68% of Delaware voters supported the change, while only 26% opposed it, indicating that Delaware may finally be ready for softer marijuana penalties.

However, Delaware may be ready for even more cannabis policy reform in the near future. The survey indicated that a majority (51%) of the Delaware voters were in favor of making the marijuana laws to being identical to Colorado and Washington’s. Only 42% of Delaware voters opposed taxing and regulating cannabis like alcohol.

The Tides Are Turning In Delaware

Marijuana Policy Project (MPP) revealed the findings of the Public Policy Poll on Tuesday. According to the press release, there are twelve other states that are currently pushing to reduce penalties to a civil fine.

“Nobody should face life-altering criminal penalties and time in jail simply for possessing a small amount of a substance that is less harmful than alcohol.” – Robert Capeechi

Another state indicating it may be ready for decriminalization similar to Delaware is New Hampshire, where the House of Representatives recently voted 215 to 92 to change the current law.

As it stands, New Hampshire treats possession as a criminal misdemeanor punishable by up to a year of incarceration and a fine of up to $2,000. However, they may replace that penalty with a civil fine of $100 – the exact penalty posed by the Delaware survey.

Robert Capecchi, the deputy director of state policies for the MPP, claims that the era of criminalizing individuals for cannabis possession is over.

“Nobody should face life-altering criminal penalties and time in jail simply for possessing a small amount of a substance that is less harmful than alcohol. We hope legislators will listen to their constituents and move quickly to end this draconian policy,” said Capecchi.