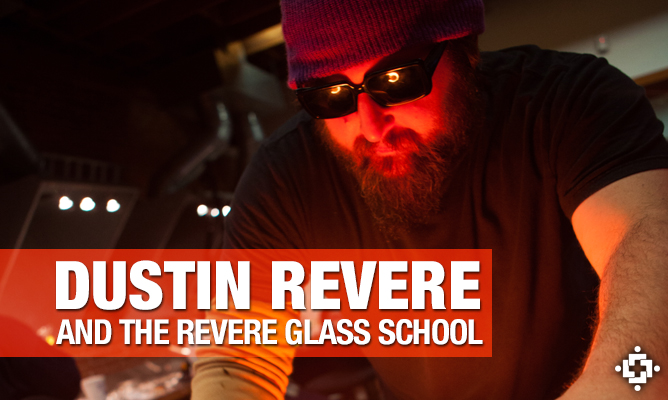 Get To Know Dustin Revere And The Revere Glass School

Glassblowing and cannabis have a long-standing symbiotic history. Every few months, as another US state legalizes and/or decriminalizes medical cannabis, the glassblowing industry garnishes more attention and increasing acceptance in American culture.

In my search to learn a bit more about the inner workings of the glass community, I had the chance to catch up with Dustin Revere, founder of Revere Glass School. He has been blowing glass for over 20 years, and his experience in the industry is one of a kind.

Dustin Revere starts his day off by taking his kids to school just like normal parents but instead of going to sit behind a boring desk all day, he heads into his glassblowing studio. Each day consists of exciting meetings, teaching lessons, or glassblowing ingenuity.

Dustin has a long history working with different art mediums, which his parents encouraged from a very young age. His dad was a jeweler and Dustin grew up in a creative environment that allowed him to truly follow his heart and pursue his passions however they developed. Naturally, we are all very curious where his love for glass developed.

“I tried every medium I could get my hands on,” Dustin explains. “I had a lot of creative energy that I didn’t really know what to do with. So, when I was a kid – do you have a penny on you?” Lucky enough, I did.

Inspecting the penny, Dustin tilts it in my direction and explains, “My dad’s a jeweler and I would take a jewelry saw… I would drill a hole in a penny right here,” pointing at the left corner of Lincoln’s shoulder.

“I was like seven, I would drill a hole in a penny and then cut around Abe Lincoln’s head and his nose and then leave that border and rim (of the penny) then then cut around all the way to his bust with a jewelry saw.”

However, Dustin points out that process is meticulous and not really up his alley. “So, when I got a little bit older, I was learning to sauder and put chains together,” he says. “I would just get them hot and melt the pennies into balls of flow and copper. You know looking back on it, I always played with fire a lot as a kid and I was always very creative.”

When asked what brought him to glass, Dustin paused and waxed philosophic for a bit before offering this response: “[Glass is] like life. It’s fluid, so it never has a crystalline structure. And it’s fragile, but it’s stronger than steel under certain capacities, like under pressure.”

“The technical difficulty of glass was very exciting for me. Here was something that no matter how hard I worked at it, I could never master.” – Dustin Revere

Before he discovered glassblowing, Dustin spent a year or so perfecting his technique at pottery. Taking to it naturally, his teachers were impressed by his creative approach to his sculptures. His comfortability with fluid art made him the ideal candidate for glassblowing, and it appealed to him in more ways than one.

Furthermore, Dustin explains that he was sucked in by the mystery of the glass world: “I was able to do something that people found fascinating, I think, which really was interesting. It was like I was a magician… If someone then had told me that I’d be a famous bong maker, and that my whole thing would be focused on pipes, I would have been like, ‘pft yeah right, Im a classical artist.’ But in reality, pipes has grown [as an industry] and I’m lucky, but I had no intention of going into it.”

It didn’t take long for Dustin to become interested in pipe making. “Here I was, able to make this shape and by nature, just because of its shape, it raised all these emotional reactions from people whether they were good or bad. From my understanding, that’s what art should do. It should evoke an emotional reaction.”

Revere Glass was founded in 2006, when Dustin realized the scene was in dire need of a pipe making school. Classes are offered in both private and public sessions. The atmosphere at Revere is relaxed, friendly, and down to earth; egos are checked at the door and everyone is on a first name basis.

Most glass schools kick out students who attempt to make pipes and here it is not only encouraged, you can take classes specifically for this. Revere has set the bar high by creating a curriculum based program that you can only find here in Berkeley, CA.

The glass blowing style offered at Revere is a hybrid of American Pipe Making only taught here or through an apprenticeship. It’s a mix of the Venetian style that Dustin first learned and the American Scientific Laboratory style. This fusion is what makes Revere special.

So special, in fact, that one student recently uprooted from Italy and to Revere because this was among the only schools in world where you can learn to make pipes. Considering that Venice, Italy is the hub of glassblowing, this is quite the statement.

“We don’t discriminate against what object you make,” Dustin jokes, “Any object you want to make as long as it’s not meth pipes!”

Revere Glass School: Inspiring The Next Generation Of Glassblowers

There were maybe ten to fifteen famous glassblowers when Dustin first started blowing glass and he has watched it take off like the old wild west. Now, he offers the following advice to aspiring glassblowers.

“It’s not a pipe dream anymore. If you are on your own, you can do it. You just have to take one step at a time. It might be watching a youtube video, maybe its finding a welding torch, an oxygen tank. That’s how I started, it’s not like someone handed me a studio, there was no craigslist at the time, I needed a torch. You have to be ingenuitive. You have a couple choices here, you’re about to go to college or figure out what you’re going to do.

You could spend a $100,000 and if you’re lucky have a job you hate or you could pay $10,000 and have a career in an industry thats blossoming during this recession. You could make 30k or more a year. I tell that to parents and they know I’m right. America has an insatiable appetite for pipes.”

“If you want to do something creative, you have a lot higher chance of being glassblower than being a rockstar, a musician or even a tattoo artist, It’s not quite flooded yet.” – Dustin Revere

In addition to the classes offered at the Revere School, Dustin believes their youtube videos are helping people learn from home in a way not possible before. “I get phone calls, emails, and comments every day about how the youtube videos have helped people get started in glassblowing. It’s very rewarding. I think we are going to be seeing a lot of new glassblowers coming on the scene. It’s going to create a lot of advancement in techniques and new glassblowers. If you want to do something creative, you have a lot higher chance of being glassblower than being a rockstar, a musician or even a tattoo artist, It’s not quite flooded yet.”

While the rest of us might dream of making spoon pipes or a favorite type of bong, Dustin dreams about how to help us get the job done. “Some people ask me what my favorite thing to make and they expect me to say a sherlock or a bubbler or a retticello, but my answer is glassblowers. That’s what I go home and dream about. ‘How can I make more glassblowers?’ ‘How can I get more people making cannabis pipes in the world.'”

“Look at what Kevin and I are doing,” Revere continues. “We’re figuring out how to get it out to people. I want those people to come to Revere and blow glass. I want people to come collab with us. It’s all a part of the same family. We are all on this safety boat, and we don’t need to fight each other. I want people to realize there’s enough room for all of us; it’s supported my family for years, it will support everyone else too. It is the healing of the nation. People don’t quite grasp it yet, but it’s cool, they’re getting it.

While it may be surprising to some, Dustin says he has no interest in leaving a legacy in the glass community. “I could care less if people remember what I do after I die.”

Explaining further, he had he following to say: “For right now, it’s kind of cool that people care what I do but after I’m dead, why would I care? When I was a kid, I saw my Dad build a school and I saw that it was possible – that’s what I’m leaving behind. I’m showing my children that it is possible, that you can do it. It’s a struggle, it’s hard, the money is not always there but I’d rather be doing this than sitting behind a desk working for the man. When it comes to Revere [Glass], I do it because it feels right. I do it because it’s fun. What’s legacy? All I have is the moment.” 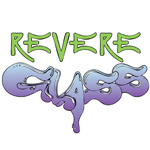 Revere Glass School was founded by Dustin Revere in 2006. It is based in Berkeley, CA, and classes are offered in both private and public sessions. Most glass schools kick out students who attempt to …