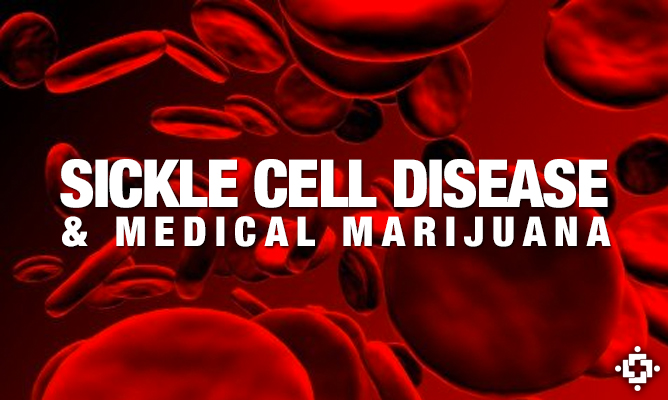 Researchers at the University of Minnesota are currently investigating whether medical marijuana can help treat chronic pain resulting from sickle cell disease. They will relocate to California to commence human trials next month.

What Is Sickle Cell Disease?

Sickle cell disease is a group of disorders that affects hemoglobin in our blood, causing red blood cells to form in a crescent shape. These cells are typically rounded, much like a donut without a hole in the middle.

“Sickle cell disease is the most common inherited blood disorder in the United States, affecting 70,000 to 80,000 Americans.” – Genetics Home Reference

In additon to the shape of the red blood cell, sickle cells can get stuck in small blood vessels and hinder blood flow throughout the body. Resulting from this lack of oxygen-rich blood flow can be bouts of intense pain, and potentially damage to vital organs like the lungs, kidneys, spleen, and brain.

According to Genetics Home Reference, “Sickle cell disease is the most common inherited blood disorder in the United States, affecting 70,000 to 80,000 Americans. The disease is estimated to occur in 1 in 500 African Americans and 1 in 1,000 to 1,400 Hispanic Americans.”

A team of researchers led by Kalpna Gupta, associate professor of medicine at the University of Minnesota, has been conducting research on mice with sickle cell disease. “We find that cannabinoids have good outcomes in treating pain,” she explains.

After being awarded $9.5 million from the National Institutes of Health (NIH), the next step is for researchers to expand their work to include human models, which they are not able to do in Minnesota. Sickle cell disease is not included in the state’s recently-passed medical marijuana bill.

Minnesota’s law is among the nation’s strictest – it will prohibit patients from smoking or growing their own marijuana plants. Just two manufacturers will operate four distribution centers each and medical marijuana identification cards are to be made available beginning July 2015 through a state-monitored registry.

University of Minnesota researchers will uproot to California, where medical marijuana is permitted to help treat sickle cell, to conduct human trials without violating state laws. They will work in conjunction with Dr. Donald Abrams from the University of California-San Francisco.

During the clinical trials, researchers will test the effects of vaporized cannabis in 35 sickle cell patients. The study is set to begin in July and Gupta’s research team are hopeful that their work could potentially lead to sickle cell disease being added to Minnesota’s list of qualifying conditions.