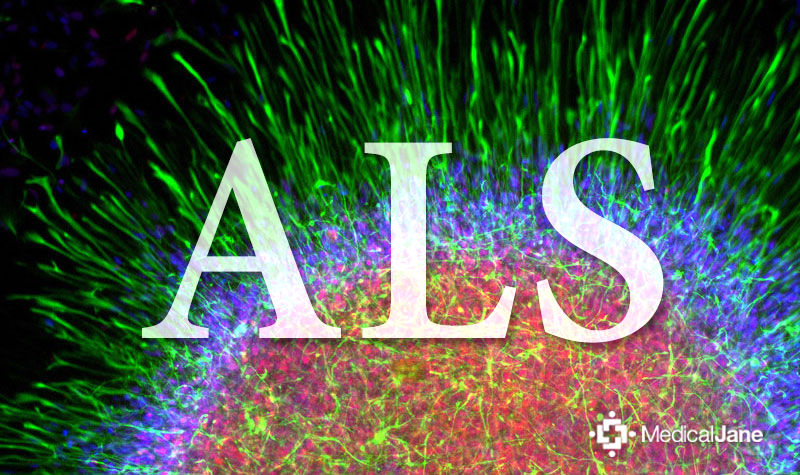 You may have heard about ALS as a result of the recent “Ice Bucket Challenge,” which helped to increase awareness of this devastating condition and to raise funds for increased research and support. ALS, known informally as “Lou Gehrig’s disease”, is a neurodegenerative disease caused by destruction of motor neurons, which are cells of the nervous system which transmit signals to your muscles to control movement. This damage leads to muscle weakness and atrophy (i.e. wasting/shrinking).

In patients with ALS, weakness begins in the extremities (i.e. arms and legs) and eventually causes dysfunction and failures in chewing, swallowing, and breathing. Symptoms include slurred speech, difficulties with walking, cramps, decreased clearance of saliva via swallowing resulting in drooling, twitching, paralysis [i.e. the inability to move] and more. Usually patients with ALS maintain full cognitive function throughout the progression of their disease, but in some cases frontotemporal lobar dementia (characterized by difficulties with language and severe personality and behavior changes) and general cognitive impairment may also develop. There is no known cure for ALS, and most patients pass away within three to five years of receiving the diagnosis.

There are increasing amounts of evidence that cannabis may be useful in alleviating the symptoms of patients with ALS. In a 2001 review published in American Journal of Hospice & Palliative Care, the authors reviewed the existing literature. They found that various symptoms caused by ALS have the potential to be alleviated by the use of cannabis, and summarized the findings in the table below.

Note: In the table below, “spasticity” is “tight or stiff muscles and an inability to control those muscles”, “wasting” is shrinking of the muscles, “dyspnea” is “difficult or labored breathing; shortness of breath”), dysautonomia is dysfunction of the autonomic nervous system (which is involved in regulation of unconscious processes such as breathing, heart, kidney, and gastrointestinal function, and more), vasodilation is “widening of blood vessels”, “oxidation” is a process which can result in the creation of damaging free radical, and an “antioxidant” is a compound which neutralizes free radicals and protects cells and tissues from damage.

According to authors of a paper published in 2010 in American Journal of Hospice and Palliative Care, “Cannabis…has properties applicable to symptom management of ALS, including analgesia [i.e. pain control], muscle relaxation, bronchodilation [i.e. relaxation/widening of the airways], saliva reduction, appetite stimulation, and sleep induction.”

Not only is cannabinoid medicine potentially useful in symptom control of ALS, but it also has the potential to be useful in direct treatment for the disease, which could lead to slowing progression and increasing survival.

“With respect to the treatment of ALS, from both a disease modifying and symptom management viewpoint, clinical trials with cannabis are the next logical step.” — Carter et al., 2010

In 2004, Raman et al. published an animal study showing evidence that delta-9-tetrahydrocannabinol (THC) (the psychoactive cannabinoid) may be useful in preventing ALS progression by reducing oxidative damage (i.e. damage caused to cells and tissues by free radicals) and excitotoxicity (i.e. excessive stimulation of a neuron, leading to damage), both of which can result in damage and death of motor neuron cells.

Using transgenic mice (type: SOD1 [G93A], which act as models for humans with ALS) in a 2005 study, Weydt et al. found that the use of the cannabinoid cannabinol (CBN) could possibly delay the onset of ALS-like symptoms, but would not necessarily change length of survival. Using the same class of transgenic mice, Bilsland et al. found that utilization of a synthetic cannabinoid may be useful in stopping progression of ALS-like symptoms. Interestingly, they also found that inactivation of the FAAH enzyme (which normally acts to increase levels of the endocannabinoid anandamide) was able to stop disease signs from appearing. However, in neither case was there an increase in length of survival. It was also found that inactivation of CB1 receptors did not affect onset of symptoms, but did result in a longer life span. This last finding shows that whatever potential exists for cannabinoid medicine in potential treatment of ALS, efficacy is unlikely a result of CB1 receptor activation. This body of evidence also signals that both stimulating and specifically inhibiting endocanabinoid receptors may modulate various disease processes like ALS.

“Based on the currently available scientific data, it is reasonable to think that cannabis might significantly slow the progression of ALS, potentially extending life expectancy and substantially reducing the overall burden of the disease.” — Carter et al., 2010

In 2010, Carter et al. (introduced earlier) explained that cannabis could offer the sort of broad approach necessary to adequately treat ALS. According to the researchers, “A multidrug regimen [for ALS], including glutamate antagonists [i.e. drugs that block the binding site of glutamate, a signaling molecule that leads to excitation of neurons] , antioxidants [which protect the body from free radical damage], a centrally acting anti-inflammatory agent [i.e. anti-inflammatory agents working within the brain and spinal cord] , microglial cell modulators [agents that control the function of cells in the brain that consume damaged tissue]…, an antiapoptotic agent [an agent that prevents programmed cell death and keeps cells alive], 1 or more neurotrophic [i.e. “nerve growing”] growth factors, and a mitochondrial function-enhancing agent [an agent that improves the function of mitochondria, the “powerhouses” of the cell, which produce energy for cells] would be required to comprehensively address the known pathophysiology of ALS.

Remarkably, cannabis appears to have activity in all of those areas…” The researchers concluded that, “With respect to the treatment of ALS, from both a disease modifying and symptom management viewpoint, clinical trials with cannabis are the next logical step. Based on the currently available scientific data, it is reasonable to think that cannabis might significantly slow the progression of ALS, potentially extending life expectancy and substantially reducing the overall burden of the disease.”

No placebo-controlled, randomized, double-blinded clinical trials have been conducted on the effect of whole-plant cannabis in patients with ALS, meaning that there is no evidence that a cause-effect relationship exists showing that cannabis use improves symptoms or slows progression for patients with ALS. When the evidence on cannabis in relation to a certain disorder is limited, we can turn to patient stories for anecdotal evidence that medical marijuana may provide relief for some patients, especially those with symptoms uncontrolled by standard therapies. A recent blog post, “The goal of medicine is to balance evidence with stories” highlights the important point which is its title. Given the favorable safety profile of medical cannabis and potential for low-risk experimentation for most patients, patient stories help in guiding healthcare professionals to which symptoms/disorders may be alleviated by the use or study of cannabinoid medicine.

A mini-documentary featuring Cathy Jordan, a woman with ALS who uses cannabis to relieve numerous symptoms and has now been alive for more than 25 years since her diagnosis (reminder: the majority of ALS patients do not live beyond 5 years after diagnosis) can be accessed here. Please note: The author of this article does not promote the title of the documentary, “Marijuana, Miracle Cure”. Cannabis is not a panacea, “cure-all”, or “miracle drug”.

In a 2004 survey study published in American Journal of Hospice and Palliative Care, 13 of 131 participants with ALS reported having used cannabis within the past 12 months as of the date of the study. According to the researchers, “results indicate that cannabis may be moderately effective at reducing symptoms of appetite loss, depression, pain, spasticity [i.e. “stiff or tight muscles and exaggerated reflexes”], and drooling. Cannabis was reported ineffective in reducing difficulties with speech and swallowing, and sexual dysfunction. The longest relief was reported for depression (approximately two to three hours).”

Given the highly favorable safety profile of whole-plant cannabis, and the severely debilitating symptoms caused by ALS, whole-plant cannabis medicine may be a safe and useful additional therapy for patients with ALS who are finding it difficult to control their symptoms with standard therapy. Increased research on cannabinoid medicine and modulation of the endocannabinoid system in relation to ALS has the potential to lead to novel therapies which may help to prevent progression, and potentially initiation, of the disease.

Click here for more information on the potential for cannabinoid medicine use in the treatment of neurodegenerative diseases.