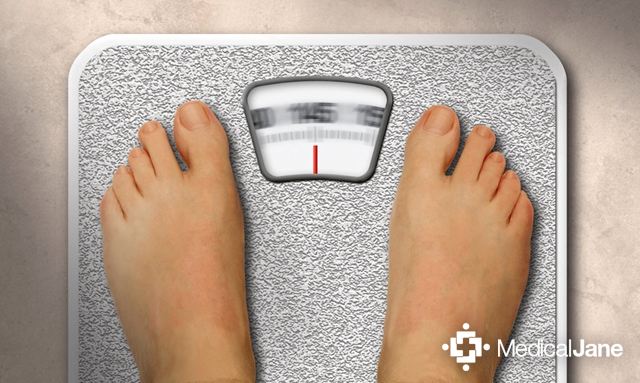 The Effect of Cannabinoid Therapy Use on Body Weight

A review, published in Innovations in Clinical Neuroscience July-August 2014, examines the research and information available on the impact of cannabis use on body weight. Their findings are summarized here.

One of the most well-known results of cannabis use is appetite stimulation, known commonly as “the munchies”. However, in studies on the effect of cannabis use in patients with cachexia (“loss of weight, muscle [wasting], fatigue, weakness, and significant loss of appetite in someone who is not actively trying to lose weight”) and anorexia (loss of appetite), often experienced by patients with HIV/AIDS and cancer, often show that cannabis use does not increase body weight (a main goal of increasing appetite, in order to improve patients’ strength and health, and ability to tolerate treatments).

Additionally, it is often found that cannabis users have a lower body mass index (BMI) than non-users, meaning that users tend to weigh less for their given height than non-users (a low BMI indicates a low-weight individual, a “normal”/average BMI indicates a normal weight individual, and a high BMI indicates an overweight or obese individual; having a BMI higher than average may result in certain health issues such as heart disease, diabetes, heart disease, etc. although the reliability of and ability to interpret BMI measurement is limited in certain circumstances).

Additionally, authors of an animal study found that when treated with whole-plant cannabis extract, obese rats gained weight more slowly than rats of normal weight. These results indicate that use of therapies that work via cannabinoid receptor stimulation may be useful for controlling obesity.

Cannabinoid therapy use may be useful for increasing weight in patients with HIV/AIDS who are suffering from cachexia or “wasting syndrome”. In 2013 alone, there were roughly 35 million people living with HIV, with more than 2 million new people infected with HIV each year.

In a review, the author found that both smoked cannabis and the legal and FDA-approved medication comprised solely of synthetic delta-9-tetrahydrocannabinol (THC, which many patients find overly anxiety-inducing, possibly due to the absence of other cannabinoids to dull the psychoactive impact of THC) increased appetite.

Additionally, in a study of patients with HIV/AIDS, participants were either given (1) whole-plant cannabis to smoke, (2) dronabinol, or (3) placebo, a sugar pill/inactive substance used to “control” studies, or ensure that results of active treatment are truly applicable and not merely the result of anticipatory/expected effects (i.e. to make sure that results of treatment aren’t “all in your head”).

Although a review of the literature published in 1997 found that pure THC (such as dronabinol) was useful for decreasing nausea and increasing appetite in some instances for patients with cancer, a 6-week study of 243 participants was ended early when researchers noted that preliminary results showed that whole-plant cannabis extract was no better than the placebo at increasing weight. Another study of 469 participants, using dronabinol, megestrol (a non-cannabinoid appetite stimulant) or both found that megestrol caused more weight gain than dronabinol, and using both was not more effective than using megestrol alone.

While megestrol is an effective appetite stimulant, it is also important to note that in some instances, megestrol use can induce side effects that are more serious than those caused by dronabinol/whole-plant cannabis use, including “impotence, decreased sexual desire, unexpected vaginal bleeding… gas, rash, weakness… leg pain, difficulty breathing, sharp [and] crushing chest pain, slow or difficult speech”, etc. However, because dronabinol/whole-plant cannabis can cause marked/intense joy (euphoria), extreme sleepiness/lethargy, and hallucinations, their use is also limited in certain patient populations, such as the elderly or those with certain mental health disorders.

Due to the fact that eating stimulates “pleasure centers” in the brain, increasing appetite is still beneficial for patients, even with failure to increase body weight. As noted by a quote in the review, “[S]timulation of the [cannabinoid] receptors in the mammalian cannabinoid system specifically increases food craving and enjoyment…”

Given that humans socialize frequently over food and meals and eating food is enjoyable, improving appetite with cannabis use may make patients feel better subjectively, even if their health doesn’t objectively improve as a result. Although one goal in medicine is to increase length of survival, improving quality of life for patients, especially those for which increasing survival is unlikely or impossible, is an equally important issue.

Why the Mixed Results?

The authors note that possible reasons for the mixed results summarized here include:

Given the highly favorable safety profile of whole-plant cannabis and the increasing amounts of evidence suggesting that stimulation of cannabinoid receptors may help increase appetite (and potentially quality of life), as well as possibly control obesity, increasing research on cannabinoid therapies and improving safe access to whole-plant medical cannabis for eligible patients experiencing cachexia, anorexia, and obesity may prove useful for many.

For information on how you can advocate to move cannabis out of the Schedule I controlled substance classification in order to increase research in the United States, expectations, and safety in considering whole-plant medical cannabis use, click here.