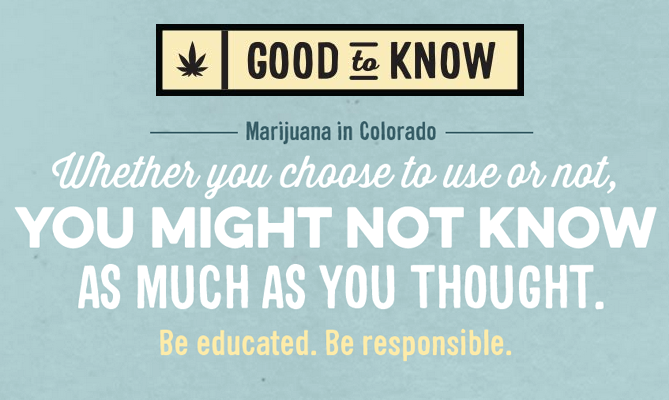 DENVER, COLORADO – Colorado is starting a brand new “Good to Know” campaign this month– a campaign that the state of Colorado is spending $5.7 million on, in order to educate its citizens and tourists all about the responsible use of cannabis, as well as to adhere to all of Colorado’s laws and regulations.

As careful regulation continues to be the main focus with the state legalization experiments, the “Good to Know” campaign is planning to spread across airwaves, newspapers, and the Internet this month, with a website already up and running at http://goodtoknowcolorado.com.

As Dr. Larry Wolk, Colorado’s chief medical officer and director of Colorado Department of Public Health and Environment explains, the “Good to Know” campaign is an attempt to educate citizens and tourists without alienating them. Although there have been previous limited educational campaigns implemented by Colorado and Washington, the “Good to Know” campaign seems to be the first comprehensive campaign specifically aimed at educating consumers and tourists about the laws and regulations regarding cannabis.

The campaign will mainly target teens, tourists, and Latinos. In addition, the campaign will target women who are breastfeeding, as Wolk indicates many are unaware that THC, one of cannabis’ main psychoactive cannabinoids, can be passed through the placenta. Moreover, funding for this campaign is generated from the taxes that are paid by consumers that choose to purchase cannabis from the variety of legal cannabis stores found throughout the state of Colorado.

With the campaign officially getting underway, there seems to be a folksy and rhyming approach for the overall campaign. This is apparent with the style and delivery of designs on the website alongside a radio spot that sounds like a rhyming cowboy that is backed by a banjo in the background.

Ads Aim to Educate Consumers More Than Ever Before

Alongside state lawmakers ordering the implementation of the campaign, there has been comprehensive tracking of cannabis usage and perception. While the first round of the survey is being analyzed, an initial investigation indicated that only 27% of Colorado residents understood that it was illegal to consume cannabis in public, and only 23% knew that cannabis could only be sold to those aged 21 and older.

According to the initial investigation, it is clear that responsible education amongst Colorado residents and tourists is much needed, and remains to be one of the main problems of the legalization experiment. This is where the “Good to Know” campaign will help. Although Colorado launched the controversial “Don’t Be a Lab Rat” campaign last year to prevent kids from consuming cannabis, it was perceived by some to be negative since the campaign utilized human-size cages designed to look like laboratory cages for rats. Those that perceived the campaign to be negative claimed that the cages were the equivalent of jail cells. However, Wolk guarantees that this new campaign is much more “bright and neighborly.”

With Colorado’s recent lawsuit from neighboring states Nebraska and Oklahoma, this campaign may be what is exactly needed. This campaign will help tremendously to educate those about the illegality of bringing any type of cannabis products into any states outside of Colorado. Additionally, there has been a surge of efforts to caution consumers about consuming cannabis-infused edibles responsibly and safely. This campaign will also help to properly educate residents, patients and tourists upon the subject, and will be a great first step forward in order to work out the misguided kinks within the legalization experiment.

Evidently, the “Good to Know” campaign is something that will establish proper education and understanding towards the regulations and laws regarding cannabis in Colorado. State Representative Jonathan Singer, a former drug and alcohol counselor, explained that this campaign will be an appropriate balance between education and acknowledgement – especially the acknowledgement that cannabis has been used safely and responsibly for decades.

“I’ve always said we need to start treating marijuana like the drug it is, not the way some fear it to be,” stated Singer.