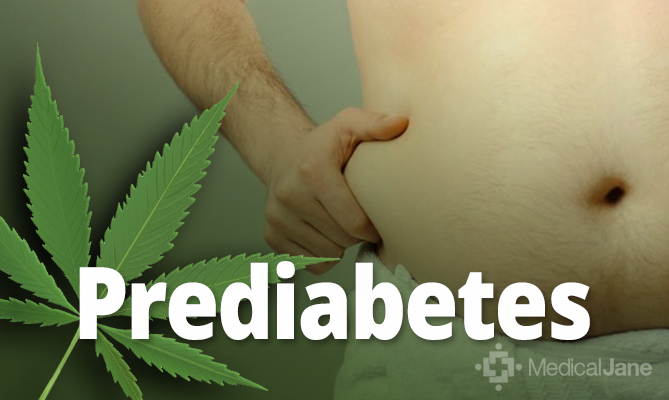 New Study: Cannabis Use May Lead to a Lower BMI

The Dangers of Obesity and Insulin Resistance

Insulin is a hormone made in the pancreas and distributed throughout the body, which functions to help glucose (i.e. sugar) enter cells, so that it can be used as energy to fuel the body. When insulin resistance (“prediabetes”) develops, cells no longer respond to insulin, and therefore take less glucose out of the bloodstream. As a result, glucose levels begin to rise in the blood, and glucose attaches to a component of red blood cells (RBCs), called hemoglobin (the part of the RBC that holds oxygen). This leads to a stiffening/increase in stickiness of red blood cells that can lead to a buildup of plaques in the walls of blood vessels. If these plaques grow large enough, they can block off the blood supply of arteries (which carries oxygen and nutrients where they are needed), causing tissue death.

If high blood sugar persists for a long time and diabetes develops, complications may include heart attack, stroke, blindness, kidney failure, gum disease, and nerve damage. Overweight/obese individuals (BMI >25) have a larger than average amount of body fat, which can lead to health issues like heart disease, cancer, high blood pressure, diabetes, and many others. Those who are overweight/obese are more likely to develop prediabetes.

Unlike diabetes, prediabetes is reversible. If you have prediabetes and want to avoid serious future health consequences, you can lower your risk of developing type 2 diabetes by ~60% just by changing your habits (e.g. increasing physical activity, improving your diet).

A study recently published in Obesity in December 2014 presents evidence that cannabis use may lead to lower rates of obesity.

Researchers used data gathered in 2004 from 786 Inuit adults, using the Nunavik Inuit Health Survey, and found that use was very common, with 57.4% of adults being cannabis users. They also found that cannabis use was associated with:

Therefore, the study supports the idea that cannabis use directly leads to a lower BMI, which itself then leads to a decreased chance of having or developing prediabetes. However, the study does not support the idea that cannabis use itself leads directly to improved blood sugar regulation/decreased likelihood of developing prediabetes (i.e. cannabinoids may not directly interfere with or modulate glucose, insulin, or related pathways).

This study adds to a growing body of evidence that suggests that cannabis use helps to keep BMI low. This is important, given the rising rates of obesity in the United States and throughout the world, which can lead to severe negative health effects. However, this particular study does not support the idea that cannabis helps to regulate blood sugar levels directly.

Given that decreasing BMI leads to improved blood sugar regulation indirectly, the results are still significant for considerations on the management of prediabetes. Increasing research on cannabinoid therapies may lead to incorporation of whole-plant or synthetic/isolated cannabinoid use in the safe management of obesity, in combination with a healthy diet and exercise.