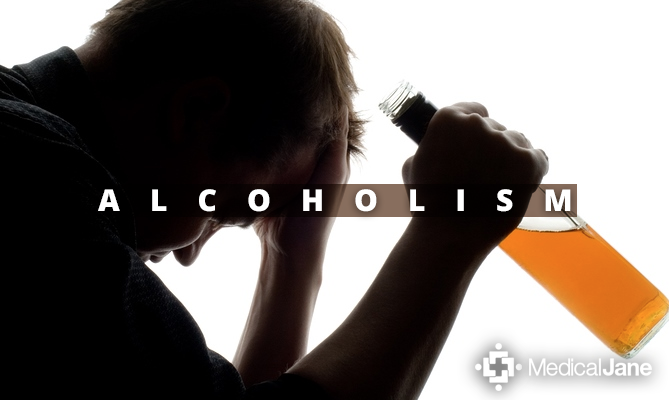 Cannabinoid Therapies for the Treatment of Alcohol Dependence

Alcohol dependence (i.e. alcoholism) may result from alcohol abuse (i.e. use of alcohol in a way that negatively impacts one’s actions/life), and is characterized by a feeling that one needs to consume alcohol in order to function normally, with a decreased ability to stop drinking even if the desire to do so exists. Those with alcohol dependence develop tolerance to alcohol, meaning that they need to consume more and more over time in order to feel the same effect they experienced the first time they drank. If alcohol consumption then stops, especially abruptly, individuals with alcohol dependence will experience symptoms of alcohol withdrawal.

Mild alcohol withdrawal is characterized by signs and symptoms including anxiety, development of tremors/shakiness, depression, irritability, fatigue, palpitations, etc., while severe alcohol withdrawal is characterized by more serious events, such as the onset of seizures and delirium tremens (with symptoms including a confused state, fever, tremors/shakiness, seizures, changes in mental functioning, irritability, hallucinations), which can lead to death in 1-5% of cases.

Even if a person who is alcohol-dependent wants to stop drinking, the negative impact of withdrawal will often prevent them from doing so (i.e. they may continue to drink to avoid the associated undesirable feelings).

Of the 38 million adults in the United states who drink too much, approximately 17 million of them have alcohol abuse disorders. Alcohol abuse is the 3rd leading cause of preventable death and results in costs totaling over $200 billion each year. Due to the huge impact alcohol abuse has on people, their families, and society, and to the fact that alcohol withdrawal is a major impediment to stopping alcohol abuse/overuse, its management is paramount to helping people overcome alcohol dependence.

Using PET scans (which help us to visualize the functioning of organs and tissues) to measure activity/availability of CB1 receptors (a cannabinoid receptor found most commonly in the brain and spinal cord), authors of a study published in The Journal of Neuroscience in February 2014 found that cannabinoid signaling varies in the brains of alcohol non-users, non-dependent alcohol users, and dependent alcohol users.

Researchers found that in the brains of social, non-dependent drinkers (i.e. “non-alcoholic” drinkers, n=20), activity/availability of CB1 receptors was significantly increased after administration of ethanol (i.e. alcohol) into the bloodstream.

On the other hand, activity/availability of CB1 receptors was significantly decreased in dependent users (i.e. “alcoholics”, n=26) after long-term, heavy use of alcohol, even after 1 month of abstinence (no alcohol use). After long-term, heavy use, activity/availability was especially decreased in the areas of the cerebellum (part of the brain involved in coordinating movements, producing fine movements, maintaining posture and balance, etc.) and the parieto-occipital cortex (area of the brain which may be involved in planning processes). After abstinence, additional areas of decreased activity/availability of CB1 receptors were the ventral striatum (a part of the brain activated when a reward/pleasurable feeling is perceived) and the mesiotemporal lobe (an area whose damage is sometimes associated with epileptic seizures).

CB1 receptor stimulation is involved with subjectively feeling reward/pleasure. However, if the receptors are overstimulated, as by long-term, heavy use of alcohol, their activity/availability will decrease. During a period of abstinence from alcohol, this decreased stimulation may lead to an increased craving for alcohol, in order to re-establish the positive feelings associated with its use. Additionally, during the early phases of abstinence, neurons become hyperexcitable (i.e. overactivated), which can lead to their damage and death.

Therefore, for alcohol-dependent individuals attempting to reduce or eliminate their alcohol use, treatments aimed at increasing signaling of cannabinoid receptors in the brain [e.g. (1) cannabinoid therapies (such as targeted, isolated/synthetic CB1 receptor “stimulators”, or potentially whole-plant use if deemed appropriate by and closely monitored by a healthcare provider) or (2) therapies that upregulate CB1 receptors], may be useful for the following reasons:

However, much more research is needed to determine whether or not use of (1) cannabinoid therapies (which, to importantly note, include endogenous/synthetic/isolated cannabinoid therapies, and not merely whole-plant use) or (2) therapies to increase expression of cannabinoid receptors, will ever prove useful clinically in the treatment of alcohol dependence.

For information on how you can advocate to move cannabis out of the Schedule I classification in order to increase research in the United States, expectations, and safety in considering whole-plant medical cannabis use, click here.

Author’s Note: Whole-plant cannabis use is not a recommended therapy for the treatment of alcohol dependence. This article summarizes one experiment showing differences in activity/expression of cannabinoid receptors in the brains of dependent and non-dependent alcohol users vs. non-users. This article does not summarize an experiment on the effects of whole-plant cannabis use for alcohol dependence. The term “cannabinoid therapies” encompasses endocannabinoids (i.e. cannabinoids found naturally within the body), phytocannabinoids (i.e. cannabinoids found in the cannabis plant, isolated or whole-plant), and synthetic (i.e. man-made) cannabinoids. If you would like assistance in reducing or eliminating your alcohol use, please speak with your healthcare provider or call the Alcohol and Drug Help Line at 206-722-3700.