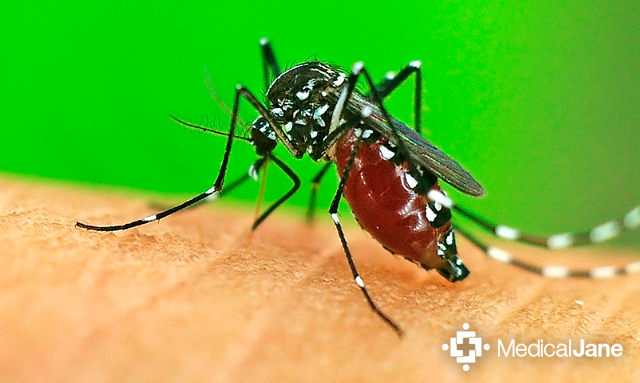 Cannabidiol (CBD) in the Treatment of Cerebral Malaria

What is Cerebral Malaria?

Malaria is a disease transmitted to humans by Anopheles mosquitoes carrying parasites (genus Plasmodium), which infect the human host and travel through the blood stream in red blood cells. If a person with malaria is stung by a mosquito that is not carrying parasites, that mosquito can then carry the parasite-filled red blood cells to another human host, who may then also become infected.

Once infected, individuals with malaria may develop the following symptoms that will arise in a cyclical nature (i.e. a predictable relapsing, remitting cycle; the infected individual will develop symptoms for a period of time, then they will go away, then come back, etc.), including:

Cerebral malaria is one of the most serious complications of malaria that may develop when the disease goes untreated or uncontrolled. While the mechanism by which cerebral malaria occurs is not fully understood, a potential cause is clogging of blood vessels that feed the brain with parasite-infected red blood cells. This can lead to decreased blood flow to the brain, and subsequently, to brain cell damage. Damage can lead to swelling in the brain, leading to long-term brain dysfunction (e.g. mental or movement dysfunction), coma, or death.

While death as a result of malaria is becoming less common (with a 47% decrease worldwide since 2000), in 2013, worldwide, approximately 198,000,000 individuals developed malaria and approximately 584,000 cases resulted in death. Malaria infection is most common in areas of Sub-Saharan Africa, South Asia, Central and South America, the Caribbean, Southeast Asia, the Middle East, and Oceania, and very uncommon in wealthy nations like the United States (only approximately 1,500 cases are diagnosed in the United States every year). Approximately 90% of deaths caused by malaria are a result of infection in African children less than 5 years old.

Details of the Study

In an animal study published in January 2015 in Neuroscience, researchers found that administration of cannabidiol (CBD) increased survival and improved mental functioning in mice acting as models for humans with cerebral malaria.

The following steps were taken to test the effect of cannabidiol (CBD) on cerebral malaria:

5 days post-infection, mice infected with the parasite and not treated cannabidiol (CBD) experienced:

However, 5 days post-infection, mice infected with the parasite and treated with cannabidiol (CBD), experienced:

Both Artesunate-only and CBD+Artesunate treatments resulted in decreases in anxiety-like behavior.

Motor function was not recovered in either Artesunate-only or CBD+Artesunate treated mice. While Artesunate+CBD-treated mice showed an improvement in learning, these results were not significant (i.e. there is a possibility that they occurred by chance).

According to the researchers, “Our results indicate that CBD exhibits neuroprotective effects in [a cerebral malaria] model and might be useful as an adjunctive [i.e. additional/add-on] therapy to prevent neurological symptoms following this disease.”

These results add to a growing body of evidence that suggests that cannabidiol (CBD) and other cannabinoids may display anti-inflammatory properties, and have the potential to act as a neuroprotective agents (i.e. ones that protects neurons, which are the primary cells of the nervous system).

Given that cannabidiol is a non-psychoactive cannabinoid that has a favorable safety profile, use of isolated CBD or high CBD strains of whole-plant cannabis may prove clinically useful in the management of cerebral malaria in humans. Increased research will assist in determining whether or not cannabidiol (CBD) or other cannabinoid therapies are effective in treating cerebral malaria, by decreasing the chances/severity of brain damage that may lead to long-term cognitive deficits, coma, or brain death.