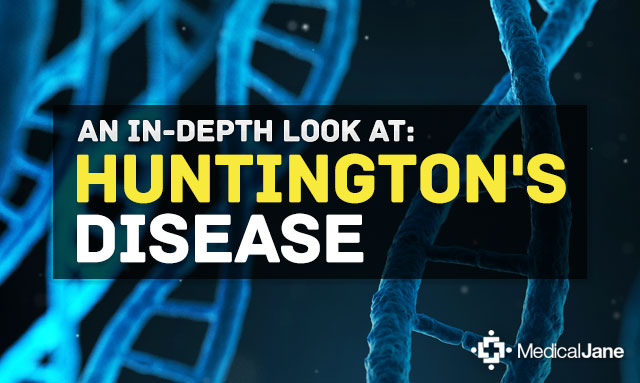 Huntington’s Disease is a genetic disorder that runs in families. If a child inherits the mutated HTT gene from a parent, they will eventually develop Huntington’s Disease at some point in their life. No current treatments can stop or reverse the disease’s progress, and drugs used for symptomatic relief have side effects ranging from fatigue to restlessness.

The best possible treatment would be one that directly targets abnormal genes. Interestingly, a compound from cannabis may have this ability.

Most of the research on cannabis has been dedicated to tetrahydrocannabinol (THC) and cannabidiol (CBD), but there are dozens of other cannabinoids with unique medical potential as well. Cannabigerol (CBG) is one of the lesser-known molecules with especially significant potential. All of the other cannabinoids are derived from CBG, so it makes sense this cannabinoid has some profound medical benefits.

In the first model, mice were given 3-nitropropionate, a toxin that induces Huntington’s Disease-like symptoms. CBG countered a number of the toxin’s effects by reducing proinflammatory markers and reactive microgliosis (a form of neuro-inflammation). It also restored the antioxidant defenses that were damaged by 3NP administration, ultimately protecting neurons and improving motor function.

In the second model, researchers used R6/2 transgenic mice, which are genetically modified to display features of Huntington’s Disease, to examine CBG’s effects. The improvement in motor function was not as strong as the 3-NP-intoxicated mice, but it was still significant.

Most interestingly, CBG had a significant effect on at least seven genes linked to Huntington’s Disease. The cannabinoid was able to partially normalize the expression of the genes, all of which were impaired in the R6/2 mice. Furthermore, it reduced the accumulation of mutant Huntington protein, which may be responsible for the majority of Huntington’s Disease symptoms.

How Cannabinoids May Benefit Huntington’s Disease

Several of the physiological problems associated with HD may be treated with phytocannabinoids. Like many neurodegenerative disorders, excitotoxicity (overstimulation of neurons) and oxidative stress (imbalance of oxidants and antioxidants) likely contribute to the cell death seen in Huntington’s Disease.

A 2013 study with animals demonstrated that CBD can reduce excitoxicity, act as an antioxidant, and modulate inflammation as part of its neuroprotective effects. Additionally, a 2012 review study posited that cannabinoids may benefit Huntington’s Disease through anti-inflammatory, neuroprotective, and neuroregenerative properties.

Although no clinical trials have been carried out, cannabinoids almost certainly have a place in the future treatment of Huntington’s Disease.