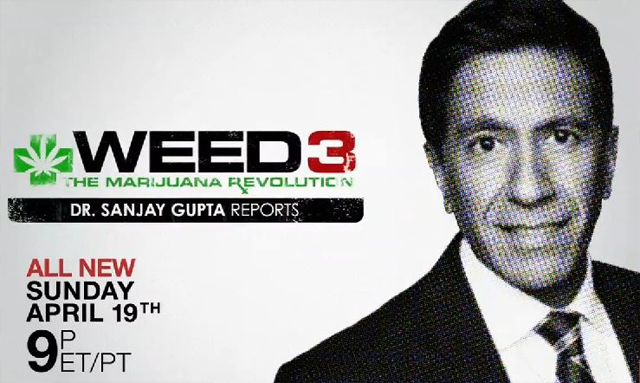 Dr. Sanjay Gupta, a neurosurgeon and CNN’s chief medical correspondent, spoke out in August 2013 apologizing for previously making negative comments about marijuana. Later that year, he launched a documentary that aired on CNN, called ‘Weed,’ in which he traveled around the world to collect scientific and anecdotal evidence of the medical validity of cannabinoids. Since its original airing, the Weed series has quickly become one of the most-viewed medical marijuana documentaries in the world.

Weed 3 will air this Sunday at 9PM EST on CNN with an anticipated special guest attracting more attention to the series than ever before. Sources are reporting President Obama will be giving his full support of medical marijuana, as well as discussing his views on drug abuse and incarceration.

The Daily Caller’s Jonah Bennett reports that an email obtained by The Daily Caller News Foundation reveals the details of Dr. Sanjay Gupta’s interview with President Obama in the special, “Weed 3.”

“I’m on record as saying that I think carefully prescribed medical use of marijuana may in fact be appropriate.” – President Barack Obama

The President boldly discusses medical marijuana and the recent bipartisan bill, the CARERS Act, which proposes the rescheduling of marijuana from a schedule 1 to a schedule 2 drug. On the subject of the CARERS Act, President Obama says, “You know, I think I’d have to take a look at the details, but I’m on record as saying that not only do I think carefully prescribed medical use of marijuana may in fact be appropriate and we should follow the science as opposed to ideology on this issue, but I’m also on record as saying that the more we treat some of these issues related to drug abuse from a public health model and not just from an incarceration model, the better off we’re going to be.”

The Obama administration has made it a priority to focus on the conditions for non-violent drug offenders, despite the Justice Department crucifying more medical marijuana businesses and patients than any prior administration.

In 2008, Obama promised not to use Justice Department resources anymore to circumvent state law in an effort to end the Bush Administration’s high-profile raids of medical marijuana providers. It wasn’t until the end of 2014 that we saw the passage of a federal spending bill that included an amendment preventing the Justice Department from going after state legal medical marijuana operations.

Obama referenced the success of public health awareness efforts to decrease the amount of tobacco smokers, inferring that we could expect similar success with cannabis by keeping the people informed. Obama was quoted saying, “You know, one of the great victories of this country has been our ability to reduce incidences of smoking, while increasing the incidences of seat belt use. You know, we save tens of thousands… hundreds of thousands… of lives every single year. We didn’t throw anybody in jail; we just made sure that they were well-informed and if somebody has an addiction, we made sure that we made it easy for them to get help.”