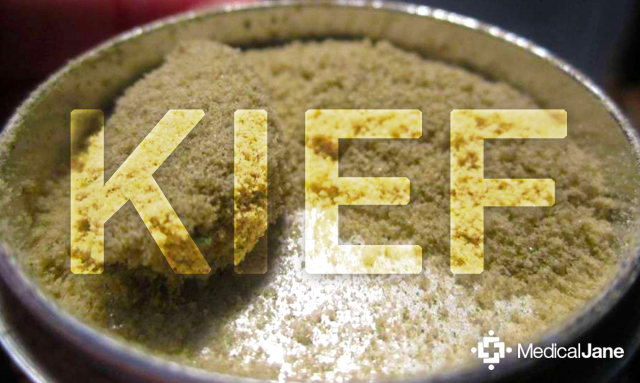 The Top 5 Uses for Kief

When a cannabis plant reaches maturity, trichomes holding a majority of the cannabinoids are formed on its leaves and buds. The accumulation of these trichomes (or resin glands) creates a fine, powdery substance referred to as kief (also written as keef or kif).

Kief on its own is more potent than traditional flower, but less potent than most extracted concentrates like shatter, budder, wax, and oil. The quality of the kief you are collecting will depend directly on the quality of the plant it comes from. Kief fairly green in color usually indicates that there is a lot of plant matter mixed in, a clear indicator of low-quality kief that should be further refined. Kief that presents very light tan or blonde with an attractive aroma is usually more pure and of high-quality.

How to Collect and Store Kief

There are many methods of collecting kief, some of which can get sophisticated. The easiest way to collect kief is by using a 3-piece herb grinder. The chamber construction of the grinder allows the ground herb to be caught in the middle chamber as the trichomes continue to fall through a screen, collecting in the bottom of the grinder.

To collect larger amounts of kief, many people create makeshift sifters using layered screens similar to the ones pictured here. Using a sifter box and a coin, you can expedite the kief collection process by disturbing the trichomes enough to make many fall off. Be sure to wash your hands and the coins first. Handle both the bud and coin as little as possible to minimize the amount of dirt and oils that get into the kief. Place a couple of quarters on the tray along with your dry herb and begin to shake the box hard for 30-60 seconds. After you are done shaking, open the box and inspect how much kief has been collected. Repeat the process until you have a satisfactory amount of kief.

On average, kief tends to measure between 75 and 125 microns, so it can be difficult to separate all of the resin from the plant materials. To make sure you’re collecting the purest kief without unwanted green plant matter, it is recommended that you stack three to four layers of fine mesh screen (each finer than the last) one on top of another.

When a large amount of kief is collected (more than a few grams), it is important to keep the kief in a cool, dark and dry space. For maximum quality, you’ll want to continually stir & mix the kief every few days using a comb to keep the kief from bunching up / sticking together.

There are many uses for kief. Here are the top 5 most common uses:

1. Top off your buds with a little kief

This is the easiest way to put your kief to use. Simply sprinkle a tiny bit of kief over the cannabis buds in your bowl, bong, one-hitter etc. Kief, when heated, tends to burn quickly and will continue to stay lit until it is all gone. To avoid wasting product while you catch your breath between each draw, it is recommended that you space the kief out by lining just the outside of a bowl (as opposed to covering the entire top layer).

2. Add kief to your morning cup of coffee

One of the most popular ways of consuming kief is by putting it in your morning cup of joe. The heat of the coffee or cappuccino will activate the kief’s cannabinoids, making them more available for consumption. Ingesting kief this way will produce a strong, long-lasting effect after just 15-30 minutes, much like eating an infused edible.

3. Whip up some kief butter

Just like you can make infused butter with cannabis flower or hash oil, you can also use kief to produce a stronger end-product. Simply place butter (not margarine) into a crock pot on medium heat until melted completely. Then add your kief and stir every 10 to 15 minutes for 5 hours. Remove the kief butter from the heat and place in a heat-proof container (a bowl). After it cools completely place a lid on the container and put it in the refrigerator to harden.

Much like you can put kief into your coffee, you can also add it to your favorite cup of hot tea. It only takes a pinch of kief (1 gram will be plenty for 4 6oz drinks) to create a powerful drink.

Hash is basically just heated and pressurized kief. Applying heat and pressure to kief alters its composition by rupturing the resin glands, changing its taste, consistency, and look. The color of kief typically darkens the more it is pressurized. Just as there are many ways you can collect kief, there are many ways to make your own hash. Here is a simple DIY method that involves parchment paper (not wax paper), an iron, and a buffer (such as a t-shirt, thin towel or even damp newspaper):

So there you have it; a simple and concise guide to understanding, collecting, and using kief. For more information on different forms of cannabis extractions, check out Medical Jane’s cannabis classroom.