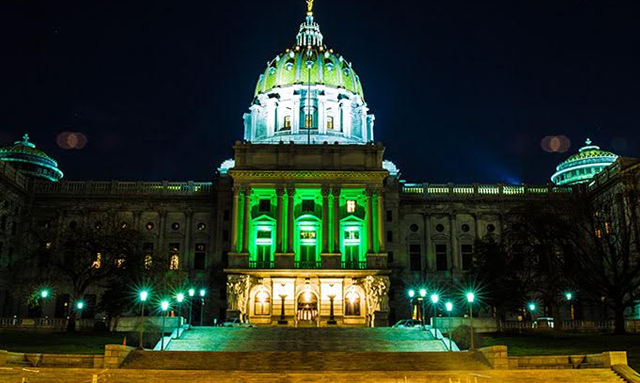 Surrounded by hundreds of patients and advocates at the state capitol, Pennsylvania Governor Tom Wolf signed into law a bill on Sunday afternoon that will make the Keystone State the 24th state in the nation, plus the District of Columbia, to pass a law creating an effective, comprehensive medical marijuana program.

The bill, Senate Bill 3, was given final approval last week by both chambers of the Pennsylvania Legislature, and Wolf’s signature on the bill marks the end of a seven year battle to bring medical cannabis to the Commonwealth, a journey marred by roadblocks and detours. Opposition from House Republicans almost killed the proposal last year, and recent changes to wording in the bill had many advocates worried that final concurrence between both legislative chambers could have prevented the bill’s passage before the end of the legislative session this summer, forcing the legislature to start the process over next year.

“I am proud and excited to sign this bill that will provide long overdue medical relief to patients and families who could benefit from this treatment.” — Pennsylvania Governor Tom Wolf (D)

The governor had advocated heavily for the passage of the legislation, and the state capitol in Harrisburg was lit green Sunday evening to celebrate the bill’s passage.

“I support the legalization of medical marijuana and I believe it is long past time to provide this important medical relief to patients and families across the Commonwealth,” Gov. Wolf said last month while the bill was still in limbo in the Republican-controlled House of Representatives.

After the bill received final approval and concurrence from both chambers of the legislature, Gov. Wolf praised the legislature for passing a medical marijuana bill that, at times, appeared to be destined for failure.

“I applaud members of both parties in the House and Senate who have come together to help patients who have run out of medical options and want to thank the thousands of advocates who have fought tirelessly for this cause,” Wolf said in a statement Thursday, after the bill’s final passage.

Now that Senate Bill 3 has been signed into law by Gov. Wolf, it will take effect in 30 days. The Pennsylvania Department of Health will then begin the process of implementing the medical marijuana program, which is expected to take between 18 and 24 months. The Department of Health is required under the law to propose temporary regulations within six months.

The Rules Outlined by the New MMJ Bill

Similar to recently implemented medical marijuana programs in New York and Minnesota, patients in Pennsylvania will not be allowed to smoke marijuana, and dried marijuana flower won’t be available at dispensaries for patients to purchase. Language in the bill allows the Department of Health to consider allowing raw marijuana in the future, but that won’t likely be considered until the program has been operational for some time.

Medical marijuana patients from other states will not be allowed access to dispensaries, as there is no reciprocity included in the new law.

Patients must suffer from specific qualifying conditions in order to be eligible for the state’s medical marijuana program. Patients suffering from the following ailments will qualify for medical marijuana in Pennsylvania once the program is operational, which is expected to take at least two years:

In addition, terminally ill patients, as defined as those with a prognosis of less than one year of life expectancy, will qualify for medical marijuana regardless of their medical condition.

Patients under the age of eighteen are eligible to participate in the medical marijuana program, but they must have a caregiver — such as a parent or guardian — who is approved by the Department of Health in order to obtain medical marijuana authorization.

The Long Road to Passage

Since 2009, many attempts to pass medical marijuana legislation in previous sessions failed in the legislature, including Senate Bill 1182 from the 2013-14 legislative session. That bill had been approved by the Senate, but never received consideration in the House. Then-governor Tom Corbett, a Republican, was staunchly opposed to medical marijuana and had threatened to veto the bill if it ever reached his desk.

When Tom Wolf, a Democrat, defeated Corbett in Pennsylvania’s 2014 gubernatorial election, patients and advocates were optimistic that the upcoming 2015-16 legislative session would see swift passage of a newly announced medical marijuana bill. Enacting a medical marijuana program was among Wolf’s campaign platforms during the election, a stark contrast from his anti-marijuana predecessor.

In preparation for Pennsylvania’s upcoming 2015-16 legislative session, two unlikely state senators — conservative Republican Mike Folmer and liberal Democrat Daylin Leach — announced that they were teaming up to present a new attempt at passing a medical marijuana bill in the state. Originally anticipated as CBD-only legislation aimed at helping children with epilepsy, by the time the bill was filed both Senators agreed that CBD-only legislation was too limited in scope, and Senate Bill 3 seemed fast-tracked to passage with bi-partisan support and encouragement from a newly elected governor.

It quickly became evident to advocates, however, that the road to bringing relief to sick Pennsylvanians would still be marred by roadblocks, speed bumps, and detours. Opposition from House Republicans almost killed the proposal last year, and recent changes to wording in the bill had many advocates worried that final concurrence between both legislative chambers could have prevented the bill’s passage before the end of the legislative session this summer.

Meanwhile, patients and advocates were faced with overcoming many restrictions being placed into the bill’s language, successfully preventing CBD-only legislation, a proposed sunset expiration date on the program, strain limits, THC limits, and medication delivery methods that could have rendered the program unworkable.

The bill was first passed by the Senate last May, receiving overwhelming support in a 40 to 7 vote, but it quickly became clear that any further progress in the House would be unlikely.

After winning approval in the Senate, the bill was assigned to the House Health Committee, who’s chair, Rep. Matt Baker (R-Tioga County) opposes medical marijuana. Within days of the bill reaching his committee, Rep. Baker — a recipient of thousands of dollars in campaign contributions from pharmaceutical companies — announced that he had no intention of allowing his committee to take up the Senate-approved medical marijuana bill.

Advocates were not deterred by Baker’s stall tactics, and following a month of pressure on lawmakers, it was announced that one representative, State Rep. Nick Miccarelli (R-Ridley Park), intended to take the unusual step of filing a discharge resolution to strip the bill from Baker’s committee and bring it up before the full House of Representatives for a vote.

Only 25 signatures from lawmakers were needed, and the petition was closed with 40 signatures. When Rep. Miccarelli rose to call the petition, in a surprising move, Health Committee Chair Matt Baker moved to instead call a vote to move SB 3 from his Health Committee to the House Rules Committee. The Health committee unanimously agreed, moving the bill to Rules and ending the stalemate.

What followed, however, was not the swift road to House concurrence with the Senate that advocates hoped for, prompting supporters, led by the Campaign for Compassion and joined by other groups from around the state, to create a “Still Waiting” room in the state house, where parents, patients and advocates established a daily presence to bring attention to legislative delays by Republican House leadership in passing the bill.

Nearly a year after passing overwhelmingly in the Senate, when the full House of Representatives was ready to take on the bill, an estimated 200 amendments to the bill were drafted, worrying patients further. Finally, just before St. Patrick’s day this year, the House met to consider the proposed amendments, leading up to a final vote. Over the course of two days, House lawmakers debated and voted on dozens of amendments to the proposal, with very few passing, and many amendments were withdrawn by their sponsors before being considered by fellow lawmakers.

Among the many failed amendments were several amendments proposed by Rep. Baker, and were aimed at reducing the effectiveness of the bill, including removing HIV/AIDS as a qualifying condition; limiting the number of dispensaries authorized in the state to only five; banning the use of vaporizers and edibles by patients; requiring authorization from two separate doctors to become eligible for medical marijuana; prohibiting patients on probation or parole from accessing medical marijuana; and setting a four-year expiration date for the program, similar to Illinois’ sunset clause.

The most significant changes to the bill by the House came as a result of the Marsico Amendment (A5835), which passed by a vote of 152-38. Some of the notable highlights include:

A 10% limit of THC was imposed when the omnibus Marsico Amendment was passed in negotiations early in the week, but only lasted a few hours. Later that day, an amendment was filed by Rep. Russ Diamond (R-Lebanon) to remove the 10% THC cap. That amendment passed by a vote of 97-91, removing the 10% cap in one of the largest wins for patients and advocates.

Following nearly three days of deliberation and compromise, the bill was finally called for a vote by the House in the early evening of Wednesday, March 16, and was approved by a vote of 149-43, sending it back to the Senate for concurrence and setting the stage a potential showdown between both chambers that advocates feared could kill the bill for the year.

When the bill was returned to the Senate, primary author Mike Folmer was concerned that some of the wording in the bill, as amended by the House, could have rendered the law unworkable. The Senate was faced with a difficult decision — correct the language and send the bill back to the House hoping it gets called for a vote before the end of the legislative session, or pass the bill as-is and work to correct the language in an upcoming legislative session.

A Victory for Patients in Pennslvania

Ultimately, Sen. Folmer concluded that changes to the bill were necessary, although many advocates were pushing for the bill to be passed as is for now and fixed later. Many of the final changes to the bill, approved by the Senate Rules & Executive Nominations Committee on April 11, were technical and designed to “ensure the bill will work once it becomes law,” according to Folmer:

Folmer’s gamble paid off. The full Senate voted to agree to the changes to the bill on April 12 by a vote of 42-7, with the House concurring the next day by a vote of 149-46. Governor Tom Wolf signed the bill into law on Sunday, April 17, making Pennsylvania the 24th medical marijuana state.

Patients will still be waiting for medical marijuana access for a couple more years, but now the end is in sight.

The full text of the bill can be found here.