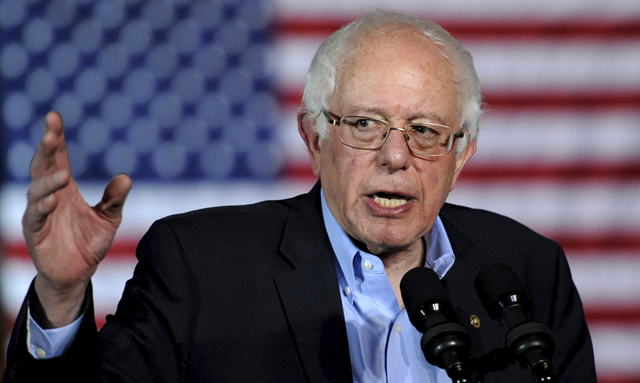 The 2016 U.S. Democratic presidential primary race will go down as one of the most unpredictable, farcical and important races in modern memory, and Californians will have a crucial role in writing the ending to one of the more absurd chapters in American history.

Get Involved In The Election Process and Vote!

If you want to be part of that history, and you are not registered as a Democrat (or “no party preference,” and request a Democratic ballot) no later than this Monday, May 23, you will miss your opportunity. California also offers online voter registration, so remember to re-register if your name or address has changed, or you haven’t voted in several consecutive general elections.

“Trump recently earned the endorsement of Sheldon Adelson, the billionaire who hates marijuana and led the opposition to deny medical cannabis to Floridians in 2014 and vows to do so again this time around.”

The dust from the mudslinging Republican catfight has officially cleared, and… (it doesn’t even feel right typing this next part)… Donald Trump has emerged victorious, and has a frightfully good chance of gaining popularity once the general election comes around. Democrats and independents from all over the Golden State – especially those who care about cannabis reform – will be faced with an important question when they head to the polls on June 7: Who stands a better chance at defeating Trump?

In true Trump fashion, the man is all over the place on cannabis law reform. He confessed to Bill O’Reilly on Fox News that, “I would really want to think about that one Bill, because in some ways, I think it’s good and in other ways, it’s bad.” He told MSNBC’s Chris Matthew when asked about legalization, “There’s a — there’s a lasting negative impact…There’s a loss of something. So that book has not been written yet, but it’s going to be written pretty soon, and I’m not hearing very positive things.”

Further, two of the most dangerous and powerful opponents of cannabis reform are behind him. Trump recently earned the endorsement of Sheldon Adelson, the billionaire who hates marijuana and led the opposition to deny medical cannabis to Floridians in 2014 and vows to do so again this time around. Trump has selected former New Jersey Gov Chris Christie to lead his transition team, who has said he will crack down on marijuana and will not permit it, and has declared that the states should not be permitted to sell it or profit from it either. He proved this in denying access to medical cannabis in New Jersey by delaying the implementation of the state’s narrow medical marijuana law.

On the other hand, both Democratic candidates have offered support for cannabis reform, albeit in differing degrees. Bernie believes the United States’ current “war on drugs” is a failed policy. He recognizes that the war on drugs has not quelled the drug-use epidemics facing the nation. Instead, he advocates treatment for drug addiction, not punishment – and he’s repeatedly introduced legislation to extensively reform the criminal justice system along these lines. He supports medical marijuana and the decriminalization of recreational marijuana, and has said that he supports the right of states to opt for full legalization.

But, what we need to remember here is it won’t matter what either of the Democratic candidates thinks if Trump is elected president.

Bernie Sanders Beats Trump in Polls, Hillary Does Not

According to RealClearPolitics, which has studied hypothetical general election polls since last July, Bernie Sanders wins out over Trump by an average of 11.4 points. Hillary Clinton beats Trump on average by only 3.3 points. However, in the two most recent polls, Trump has actually beaten Hillary by 5 and 3 points consecutively. So, if we’re to go by polls, Bernie is the obvious choice to become the next Commander in Chief, right? Not exactly. Unless he beats out Hillary first, there won’t be an opportunity to prove the polls right.

“In March, Huffington Post reported 33% of Sanders supporters will not vote for Clinton if she wins the nomination, and that number continues to grow.”

Whether you believe Bernie Sanders is the obvious choice, or whether you really just want to keep Donald Trump out of the White House, you need to understand a few things, otherwise we may be looking at a Trump / Clinton ticket and then shockingly a Trump presidency. Now that’s a scary thought. In March, Huffington Post reported 33% of Sanders supporters will not vote for Clinton if she wins the nomination, and that number continues to grow. The New Yorker recently reported that if Clinton does get the nomination, she will desperately need the backing of the young voters and progressive voters who have flocked to Sanders, and will also need to tap into some of the enthusiasm and commitment that the Sanders campaign has engendered. But if this doesn’t happen, many believe Sanders supporters will not vote for Hillary, so Trump will be the one to benefit.

You can prop up Clinton’s political accomplishments all you want. She does have a few noteworthy examples on record of doing some pretty admirable and positive things. There’s just one decently large problem. She is a serial liar. Even when caught in a lie, she will double down and try to implement revisionist history rather than just owning up to it. She accepts huge campaign contributions from the very same powerhouses that she publicly claims she wants to reign in. She refuses to release transcripts from speeches she’s given to the insanely wealthy. Let’s not forget, by the way, that there’s a possibility she could be criminally indicted and is currently under investigation by the FBI. Hillary Clinton, whether you believe in her abilities as a politician or not, is not trustworthy. She may believe in what she says, or she may just be pandering for the cameras. Nobody can ever really know. Public opinion polls, for whatever they’re worth, have indicated for some time that a large majority of people don’t trust her.

Hillary is benefiting from the rules Democrats play by. After the party was torn apart by the Vietnam War — some Democrats believing Vice President Hubert Humphrey had been forced down their throats as the 1968 nominee — leaders changed the nominating system to give more say to voters at the grassroots level. But after the landslide defeat of George McGovern in 1972 and Jimmy Carter in 1980, the feeling was some modification was needed, leavening the will of the people with the presumed wisdom of political insiders; hence the birth of super-delegates.

Bernie Supporters: Don’t Give Up, There Is Still a Chance

Bernie Sanders, however, is the pinnacle of integrity in American politics. What he has accomplished is no small feat considering that he started polling at around 5% and was virtually unknown. Every party-obsessed establishment Democrat, national news media pundit and special interest group had already declared Hillary the winner before a single primary vote was cast.

Bernie didn’t shy away from shouting about issues that millions of Americans have longed to hear about for years. The game is rigged. The wealthy only get wealthier while the poor are disenfranchised and disadvantaged. Politicians are routinely influenced by money. Yes, we can afford universal health care and free public college tuition. No, marijuana is not equitable to heroin. No, people shouldn’t be locked up in prisons that profit from locking people up. Enough lies. The only thing Bernie has really shied away from, despite the easiness of the target, is pointing out how his opponent is a champion of that exact same broken system – a product of wealth, privilege and un-relatable political influence.

The same societal frustrations that contributed to Bernie’s rise is partially how Trump outpaced, outperformed and eventually outlasted every different variation of Republican establishment candidate that tried to take him on. While candidates like Jeb ‘Please Clap’ Bush and Ricky ‘Robot’ Rubio had all the “traditional” makings of a perfect Republican candidate, in today’s climate that approach generated nothing but apathy. Trump came out swinging, running his mouth like a wood chipper and dismantling anybody foolish enough to enter the arena with him. He berated his way into the bitter hearts of the American public. People who may have never stepped into a voting booth prior to 2016 did so enthusiastically, just as long as they could vote for the guy who “said what was actually on his mind.” Being anti-establishment gave Trump the win.

The math may be in Hillary’s favor, but don’t let that stop you from exercising your right to vote. It is important to remember that politics are unpredictable and anything can happen, so don’t sit back and watch it happen – be a part of the process. Californians, keep the revolution alive.